Agape Community > Blog > Servant Song > It Runs In the Family: On Being Raised By Radicals by Frida Berrigan

It Runs In the Family: On Being Raised By Radicals by Frida Berrigan 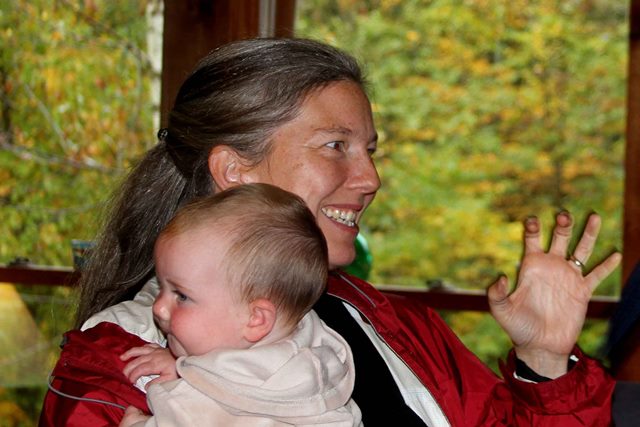 Once, when my husband Patrick was a kid, he and all his friends were sitting under a big table in a circle. They were talking in emphatic and verbose gibberish—each taking a turn and getting more and more animated as they went along. Finally, one of the adults had to ask, “What are you kids doing?” “We are having a meeting,” one of the kids declared with that no-duh kind of voice that they perfect at such a young age.

I read not too long ago that if kids get to see their parents at work, they will mimic that work in their play, as Patrick and the play-group kids did. It is evolutionary. Since the dawn of time, kids have learned how to hunt, forage, farm, and worship by playing. They try on different roles within family and society through their play and learn how to navigate the world.

When we were little, my brother and I played “Protester.” We would fill baby bottles with water (the water was pretend blood), close the massive front door of our house, eye it from the bottom of the stairs, and then run up as we unscrewed the bottle, closed our eyes, and flung our water at the highest part of the door, while loudly decrying war and militarism. The other sibling would play the part of the police officer, wrestling the “protestor” to the ground—which was tricky on our marble front steps—and carting them off to the paddy wagon. If the game was good, the protester would continue to testify throughout the arrest, maintaining a noble and nonviolent dignity during the police manhandling. But most of the time the game devolved into simple, plotless, unredemptive roughhousing.

Other times we would dump ashes that we had gathered from our woodstove. It was harder to throw ashes than the adult protesters at the Pentagon made it look. You had to get the ashes out of the bag smoothly (hard) and fling them just right (harder). If you did it wrong, it was neither haunting nor evocative—it was just a pile of ashes on the steps. Either way, it was a pain to clean up, so we only used ashes occasionally.

We learned these games from watching our mom and dad, friends, and community members mark the Pentagon with blood and get arrested so often growing up. We had doctor friends who took blood from anyone who was willing to give it and then we stowed it in the freezer alongside the ice cubes and frozen, concentrated orange juice. The blood was supposed to remind the workers of the Pentagon that even though they went to work in clean, antiseptic offices every day, the work they did shed blood all over the world. Often, they walked right through the blood on their way to work, tracking brown stains down the hall.

The ashes were used to remind the workers of the people turned to ash in Hiroshima and Nagasaki, where the United States dropped nuclear weapons in 1945. The bombs incinerated tens of thousands in an instant.

The pillars of the Pentagon are made of white marble. The blood, thrown from a plastic baby bottle, splashed bright and red and nearly indelible, soaking into the cracks of the stone like water into a sponge. The workers would spray bleach and water and soap, and scrub with long-handled brushes. They had a whole team of people tasked with protest cleanup. They wore green jumpsuits. I remember that one of the men on the team only had one arm and he would pin his arm flap to his shoulder, giving him a sort of lopsided, martial look.

They were grim in the face of their task. After the AIDS crisis struck, they also wore hazmat suits complete with booties and head gear. Sometimes protesters would try and block them from cleaning up, chanting, “You can’t wash the blood away.” But the blood always got washed away, and it made me uncomfortable that we were most often pitted against the janitors instead of the generals.

When the police knew we were coming to protest, they wrapped the pillar in plastic. It was unsightly and probably a lot of work, but it protected the pristine marble from being marred and stained by blood. Over the years, the pillars got marginally thinner, worn down by so much blood splashing and spray painting, so much power washing and scrubbing. This was seen as a minor victory. We were making an impact! Like drops of water carving rocks over millennia, we were changing the Pentagon with our actions and our presence. Eventually, however, they treated the marble with some sort of polymer that made it easier for the maintenance workers to clean the blood and paint off.

Blood and ash. Basically, we made a big mess. I don’t remember if we just outgrew our game or if our folks got tired of the spectacle and mess, but we stopped playing Protestor at some point. That kind of protesting at the Pentagon also came to an end. Not even the most intrepid protester can get anywhere near the Riverside entrance to the Pentagon any more. The redesign of the whole Pentagon complex after the destruction on September 11, 2001 makes most of the building unapproachable to all but workers with IDs.

I think our game reflected our parents’ and friends’ seriousness about their work. But by switching back and forth between protester and police, we each got to experience the affrontedness and exasperation of one side as well as the outrage and rectitude of the other. The game did not make me want to throw blood at the Pentagon, and it also did not make me want to arrest people.

And now I am forty and I haven’t done either of those things, but I have risked a lot for peace and justice. Not as often or as intensely as my mom and dad, and not since I have had kids, but I have been a brazen lawbreaker within the context of community.

To read on, get It Runs In The Family: On Being Raised By Radicals and Growing Into Rebellious Motherhood, OR Books, http://www.orbooks.com/catalog/it-runs-in-the-family/

Brayton and Suzanne have known Frida since she made big messes with Jerry playing protest. As young children in 1980, they attended the Shanley’s wedding, their mother Liz McAlister, the homilist. Frida’s dad, Phil, and Uncle Daniel Berrigan SJ, were in jail for the Plowshares 8 action in 1980, which became a marker for hundreds of other such actions nationally and internationally.