The Agape Community: A Brief Profile

Agape is a residential, lay Catholic Community dedicated to prayer, sustainable living, and gospel-centered nonviolent witness in the world.  Agape was co-founded by Suzanne Belote Shanley and Brayton Shanley in 1982 with Fr. Emmanuel McCarthy and Steve and Nancy James. In 1987, Suzanne and Brayton moved with their daughter Teresa to Hardwick’s Quabbin Reservoir watershed to incorporate sustainability and ecology into their lifestyle of nonviolence.

Brayton and Suzanne, along with many interns, assisted hundreds of volunteers who selflessly contributed to the building of structures on the Agape homestead. These structures include the main house and residence, St. Francis House, as well as St. Brigid House, a straw bale house with composting toilet. Both houses are run on solar power. Agape’s large organic garden feeds the community and guests throughout the year, while wood from Agape’s 34 acres provides the community’s only source of heat, wood burning stoves. Many pilgrims travel to Agape’s hermitage, behind the main house, for rest and prayer, joining in community prayer three times a day and simple, plant-based fare.

Brayton Shanley earned his BA from 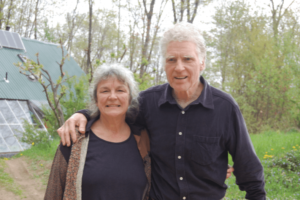 St. Anselm College in New Hampshire and an MA in Pastoral Ministry from Boston College. He has taught college courses on the Philosophy of Nonviolence at Worcester State and as an adjunct professor at Anna Maria College in Paxton, MA and has been leading workshops, retreats and seminars on Prophecy and Peace, Gospel Nonviolence and Sustainability, simplicity and Resistance since the early 80′s. His recently published book, The Many Sides of Peace: Christian Nonviolence, the Contemplative Life, and Sustainable Living (Wipf and Stock, 2013), is used nationally by professors, students, and religious orders.

Suzanne Belote Shanley completed her MA in English at the State University of New York at Buffalo and a post-Masters Degree (MPhil) in English at Simmons College in Boston MA, where she taught in the late 70’s for three years. Suzanne has taught college courses at Worcester State, Boston College, Anna Maria College in Worcester, as well as courses at the Paulist Center in Boston, workshops and seminars at colleges throughout New England and programs in LeMoyne University, University of Notre Dame, Jesuit School of Theology (Berkeley, CA),& St. Thomas University. She has studied the topic of women and war for over 35 years, bringing to life biographies of pacifists in the women’s movement past and present, while inspiring young people to claim their nonviolent heritage.

In the 1980’s Suzanne Belote Shanley and Brayton Shanley created programs on Christian Nonviolence which they taught in Boston and throughout New England, including year long programs for staff and students at Cathedral High School in Springfield; North Cambridge Catholic in Cambridge (Peer Mediation Program), MA; McAuley Nazareth Home for Boys in Leicester, MA and Bethany Hill School in Framingham, MA. Prison work has included programs at MCI Framingham for women, Hampden County Jail, and MCI Norfolk, emphasizing nonviolent conflict resolution. The Agape Community has hosted a yearly vigil against the Death Penalty at Boston’s Statehouse since 1983, and its members have been advocates for death row inmates and for the abolition of capital punishment. Agape is a seamless garment community, dedicated to life in all of its stages and opposed to all that threatens this life including war, abortion, capital punishment, euthanasia and the degradation of the planet and its resources.

Brayton and Suzanne have led retreats, workshops, and seminars from middle and elementary school, to high school and college, on the topic of The Spirituality of Nonviolence, most recently at Worcester State and Anna Maria Colleges. Agape is sustained through financial, prayer and volunteer support of a broad spectrum of individuals who embrace its ministry which has included working with at-risk and inner city youth, as well as prison ministry and outreach to prisoners on Death Row, and civil disobedience in response to war.

Agape has hosted two college retreats a year, which have attracted hundreds of college students, as well as annual events including St. Brigid and St. Francis Days and an evening on Spirituality and the Arts. Agape’s Mission Council is comprised of 12 members including one woman religious, a Jesuit priest, and lay people from various faith traditions and backgrounds, who oversee and guide the community vision. Agape’s bi-annual journal, Servant Song, is a highly regarded literary publication which features articles on Contemplation and Action, Sustainability, and the many facets of nonviolence in relation to Scripture, Catholic Social teaching, ecumenism and interfaith spirituality.