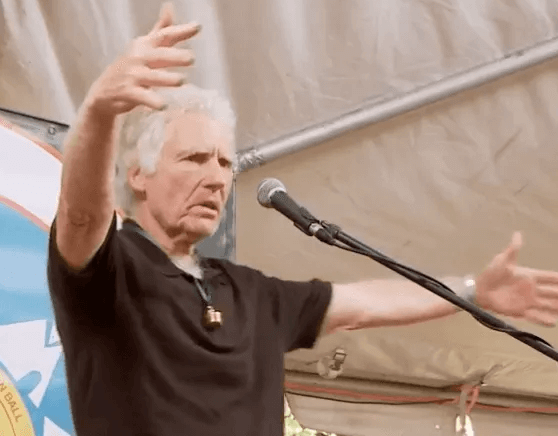 It is October 7, 2017, and I am looking out at the crowd of 350 people with about one hundred Native people representing twenty tribes. As Native sisters and brothers drum, dance, sing, give talks, and display their beadwork, I wonder: “How could a scene like this happen at Agape?”

Asking the question, I begin to answer it myself: This scene would not be making our community grounds sacred, if it were not for this fact: Native Americans, since 1492, had been “found” by European settlers; then, threatened, tortured, driven off their land, and killed. This genocide happened in the land I call “home.” Some revelation about this Native History had burst within us at our community. The witness at Standing Rock, where I landed in December 2016, ignited that flash point.

The movie “Dances with Wolves” depicts Native Tribes being driven west one after another and slaughtered. In retreat, these First Nation People asked themselves: “Who are these people?” “What evil planet did they invade from?” “Are they human?” I was asking myself: “Could I be a descendent of these people?”

When I was at Standing Rock, the book, “The Indigenous Peoples History of the United States” by Native American historian Roxanne Dunbar-Ortiz, was required reading. Ortiz posits that “Colonialism requires violence to attain its goals. People do not hand over their land, resources, children and futures without a fight. European-American colonialism as an aspect of capitalistic economic globalization had from its beginnings a genocidal tendency, that is, intent to destroy a racial or ethnic group.”

The first racial ethnical cleansing in the Americas was that of North American Indigenous people, America’s original sin. So, I still want to ask…why? Why were these settler colonialists of European descent driven to such extremes of oppression?

In the mid 1980’s I took a course at Boston College on Liberation Theology taught by Gustavo Gutierrez, the leader of Liberation Theology. He centered his most memorable class on a debate in the mid-1500’s that justified one of the worst patterns of ethnic and class oppression in all of history, between two Spanish theologians, Juan Gines de Sepulveda and Bartolome de las Casas, fifty years after Columbus.

The controversy revolved around the question: Who are these peoples that the Europeans discovered in the New World? Were these Indigenous, “primitive” peoples capable of self-governance, even as the Spanish were arriving and provoking a clash of civilizations?

Sepulveda defended the colonialist position which claimed that natives were “natural slaves” as defined by Aristotle in “Politics”: “Those whose function is to use their body and nothing better…are slaves of nature (and) better to be ruled as such.”

Fr. Guttierrez maintained that Sepulveda concluded that the natives of North America “were heathens (non-Christian) and unequal to Europeans” believing “these natives are as children to parents, women as to men, cruel people to mild people.”

Las Casas, using the same Bible as Sepuveda declared that Christian faith must be presented to Natives as a religious option, not by force or obligation as his antagonist advocated. Gutierrez emphasized that Las Casas saw Natives as heathen, non-Christians yes, but as equals. Indigenous people should enjoy the same freedoms as any people. Native people were fully capable of ruling themselves, even as settlers arrived.

Sepulveda won this debate in the world of public opinion throughout Spain and around Europe, reinforcing and fulfilling an already fixed European self-understanding that White Europeans were the supreme race and that White men were the ones fit to rule the world.

As the Puritans began to arrive in what became Northeast North America, they saw their “discovery” as a covenant with God, a gift given to expand Christendom. The Spanish and Portuguese, with their Imperial designs on the New World, brought with them their Catholicism, the “only true Faith,” without which there was no salvation. Supreme White Race marries the Supreme Religion.

Now I could begin to grasp how a scene with so many Native people evolved in October 2017 at the Agape homestead, a Catholic community. This history is why we dedicated Saint Francis Day to “Listening to Native American Voices.”

It is also why Native Americans could not comprehend the reasons for the extreme cruelty of Europeans when they arrived in Indigenous Peoples’ homelands. We Agape Christians invited Native Americans to our community in the spirit of St. Francis as an opportunity for a face-to- face repentance for this unspeakable Christian-perpetrated genocide. We at Agape hail from the same European Christianity that blessed the Doctrine of Discovery, giving our ancestors title to the lands they “discovered,” while Indigenous inhabitants lost the natural right to their land.

The historical fact of White Supremacy answers my question “Why did this happen?” Our forebears in the Faith did what we so frequently do today, strip Christianity of Jesus and proceed to conquer the world to which we feel entitled as the Supreme White Race believing in the Supreme Religion. We are destined to rule other races and peoples, ordained, not by the God of Nonviolent love in Jesus, but by the god of money and military might.

Christians are now in the liturgical season of Advent, a solemn time of waiting for the coming of Jesus, the Prince of Peace. Our history reeks of unreconciled sins of oppression. We long to disarm ourselves of these weapons of oppression. Jesus, how we need you to come, to heal us of this ingrained violence, of our sense of entitlement to the highest place made possible by the color of our skin. 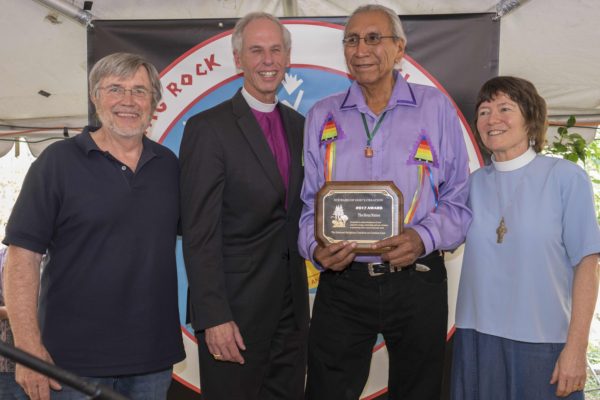