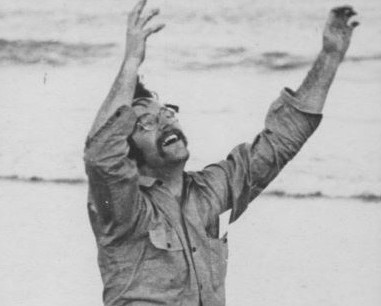 Paul McNeil was an amazing friend whose cancer diagnosis and decline, startled and staggered all who kne

w him. Yet, with his typical depth and intensity, he focused on his interior world, spitting out a poem on his encroaching death and merging with God, becoming God’s own self which returns Paul, in the poem, to himself as the” I Am” of the poem. So typically Paul these sentiments–depth, power, seriousness, literature, and, love…most emphatically, of his family, Claudia, his wife and their eight children.

For Paul, family included the human family and the Agape family too, so he joined with Brayton and me, and fifteen others, a group arrested the day the US invaded Iraq, where chemical weapons research occurs. We became known as The Peacechain 18.

Paul was present at the St. Patrick’s Day Peace Parade, marching with Veterans for Peace, shunned by the parade committee for years because of their peace banners. A devout Catholic, he came to Agape, disillusioned with the church after his father exposed him to Dorothy Day, and to “unconditional love of God,” as he wrote in Agape’s 25th Anniversary booklet, living from then on, “at odds with the institutional Church’s words and practices.”

Paul’s devotion to Agape came from his sense that he had found his spiritual home: “I savor the Mass and other events there, because it is the experience of loving community…I don’t hold out much hope for the institutional church…spiritually dead…fundamentally flawed to the core. The church needs conversion.”