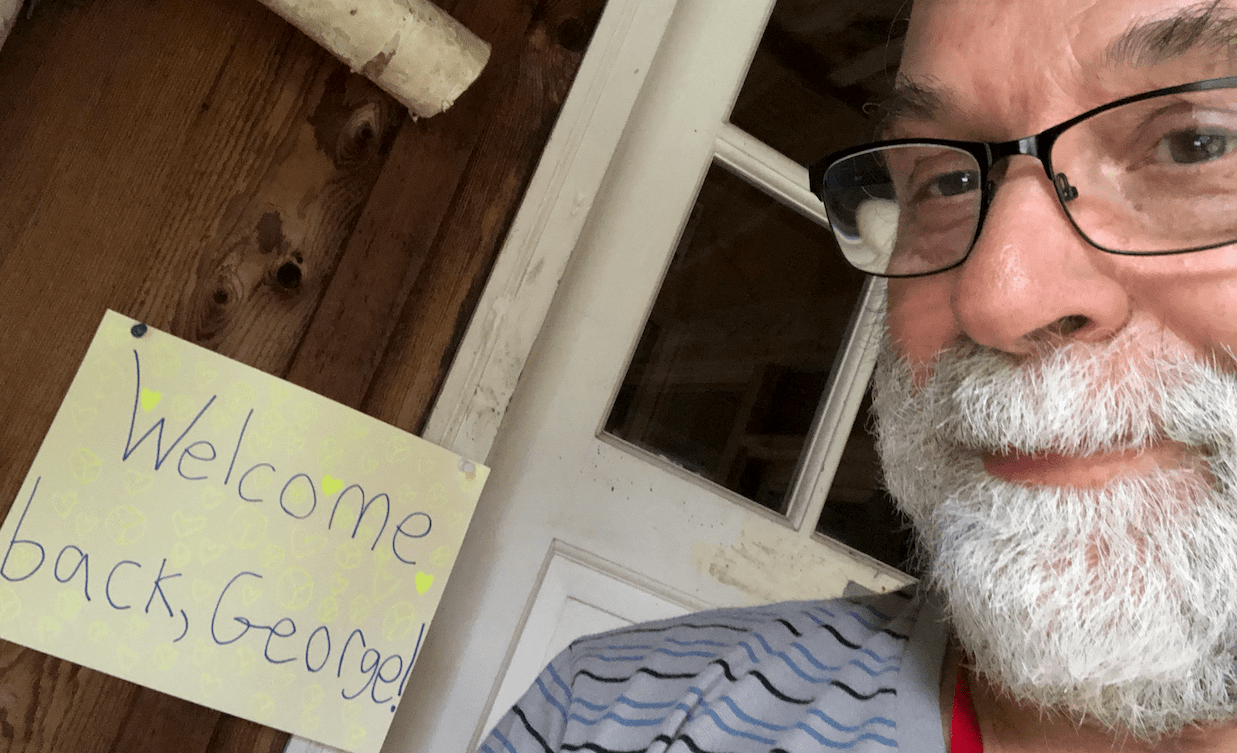 In fact, 28 days.  This year my Francis Day stars aligned in such a way that I’d be spending 28 days at Agape Community in Massachusetts helping to organize Francis Day as I transitioned to midcoast Maine after a summer in Azeitão, Portugal immersed in learning Portuguese and  getting to know the people, history and current political situation in order to better understand the wildfire situation within the context of climate catastrophe.  The tranquility of winter on midcoast Maine is the perfect foundry for my new media pen which I believe to be mightier than the sword! The revolution is upon us, the time for “just going shopping” appears to be over in America and what better way to prepare than connecting with spirit at Agape!

From September 13th to October 10th I was beyond blessed to have been a member of the Agape Community where I worked hard, prayed hard and ate unbelievably well – paraphrasing a small hand written note on the refrigerator.  Almost nothing makes me happier than walking between a kitchen and a garden with a colander in hand. My time there was at once an infinity and yet, somehow just the blink of an eye! Working, praying, singing, eating and being with Aria, Brayton, Dixon, Suzanne and others for those 28 days all the while focused on a common goal of organizing a day where some 200 people would join together in celebration of St Francis of Assisi; where we would converse, sing, eat, pray, think, listen and learn about how to confront systemic racism – Francis Day Oct, 6, 2018.

A meal to remember!

On the very evening of my arrival an intense story was told around the dinner table. Eduardo, an important voice planned for this year’s Francis Day, shared his story; a community organizer and Mexican immigrant who finds himself here “illegally”, yet one listen to his story led me to believe that he should be warmly welcomed AND with open arms.

Eduardo’s heritage is Mexican American; a long history of people thriving in these Americas going back many centuries.  And compared to my heritage which is European exactly 3 generations deep; 1 century perhaps – un ciglo tal vez?  So, who is an American anyway?  Yet we find racism and nationalism are in our faces everyday now! The rise of Nationalism and NeoFacism within the US, the rest of the Americas, indeed the whole world has become an urgent issue.

Eduardo’s remarkable story of a young boy setting a selfless goal was a story which he proudly shared and a story any parent, grandparent or even an entire village would be proud of.  He explained to us how his people see themselves as an important part of a community.  It was beautiful and something which I’d like to see more of in our society and culture and which the Agape Community clearly demonstrates is possible; even here in toxic America – circa 2018.

Eduardo’s story lasted almost 2 hours and was sometimes tearful and very difficult to take in.  He began at 13, in a small farming village in central Mexico.  NAFTA had changed his world such that their produce became “worthless” because it  had to compete with mega farms which were encouraged by NAFTA.  So, at 13 Eduardo decided to go to America to work; he would send money home to his mother, grandmother AND small village who raised him. He exuded an admirable quality of belonging to something bigger than self.

Let me just say, his road was rocky and the amount of determination, courage and ability to withstand pain, sorrow, racism and injustice is hard to describe.  Sadly, we have all heard stories like Eduardo’s, mind-boggling stories of cruelty and injustice, and always, always, people who never deserved to be treated so poorly!

As it turned out, Eduardo was not able to be present on Francis Day however his spirit was certainly there with all of us who broke bread that night.  We listened intently to his every word and now carry that good message and his spirit forward, just as we were doing with St Francis.  And Eduardo continues his work organizing for peace.

Yet another treat during my stay was morning prayer; 7:30am M-F, 9am Saturday in the chapel. During the week of St Francis’s birth we focused on St. Francis’s life and legacy; along with Clare of Assisi and Gandhi whom also shared that birth week. Most things St Francis, Clare and Franciscans was learning for me having left my Roman Catholic roots as a teenager, some 5 decades ago. Now, I learned in detail that St. Francis was the patron saint of animals and the environment.  Like St. Francis, our environment is important to me so I wanted to know more; to understand how the memory of a man leaps ahead 8 centuries and manifests as Francis House and  even a whole “Day” in Massachusetts every year!

Meanwhile, the world still turned and burned while four weeks of history transpired as we accomplished our tasks. Since Trump has been elected, daily events are almost always some flavor of: “hard to believe”, “this can’t be right”, and/or “what’s wrong with this picture?”!

The whole Kavanaugh nomination was in full rancid bloom as October arrived and before we knew it; a man clearly without any judicial temperament, to say the least,  is the newest justice in the highest court in the land.  The notion of balance is gone, the wheels of justice appear to have changed direction!  All this while the GOP are appointing district and federal judges as quickly as they dismantle the things people deserve, need and care about like say the EPA in the time of climate catastrophe and extinction!  The world wide reputation and “brand” of these United States of America is tarnished by this president and his administration, the GOP and Trump supporters.  Is it really THIS bad?

And look what happened to Dr Christine Blasey Ford, she was “kavanaugh’ed” twice!  This is a disgrace!  Her life is no longer “normal”; she lives under constant fear.

Likewise, we can all see that climate change is here and now, yet our government is so there and then.  Many Americans are just tuning out.  Turning off the news and quitting.  It is that bad!  Watching all this take place, Brayton would talk about how it seems politics is so broken and that the only way forward is spiritually based. Our current world political situation has become soulless, our politics are failing us!

It’s no surprise that St Francis, as patron saint of animals and the environment, tells us this very same message of faith.  And we heard it from last year’s keynote and spiritual leader Chief Arvol Looking Horse when he said:

The Great Spirit gave us the sacred land not to own but to take care of. Take care of our medicine plants, and the animals.

But the trees are burning and the animals are dying!  Our broken politics, anthropogenic climate catastrophe, pollution and habitat change are causing what is accurately deemed the 6th Extinction.  But, like the revolution, it is really not being televised, now is it?

Our Children, Our Future

So, with all this guidance from St. Francis to Eduardo, it is incumbant upon all of us to notice what is happening to the animals, to our environment, to our future or at the very least, our children’s future.  These are not ordinary times; the forests are burning and the oceans are rising while the intensity and frequency of weather destruction is causing so much damage that recovery often takes longer than the next storm.  The trend is clear; yet our political system is so broken, hope can be difficult to maintain.

We also know that our government, in fact many current governments, are capable of genocide, slavery, torture; all kinds of unimaginable injustice. Nationalistic popularism and NeoFacism are on the rise worldwide, perhaps a useful tool for the 1% to divide the people as climate catastrophe accelerates migration.

Just about anyone with a heart beat and the strength and courage to pay attention knows we live in unprecedented times.   Now, as expected,we have Jair Bolsonaro as the new President of Brazil.  This continues an alarming trend toward tyranny that we can see taking place right in front of our eyes… India, China, Russia, Philippines, Turkey, Egypt, Saudi Arabia, Poland, Hungary, Venezuela, Syria, Bahrain and yes, the US of A.

But there is hope.  We have St Francis, Chief Looking Horse, MLK, Gandhi, Eduardo and so many others who have the courage and vision to see thru all the crap being fed to us by the 1%, the deep state, the people like Trump, people whose only faith seems to be more, more, more!

And finally, with all this we have solar-powered Agape Community, a spiritual beacon which recognizes and resists tyranny, that loves the animals and recognizes and values community and the sacred Nipmuck land on which it is built. So, there really is still hope!

Voices: Notes from the Agape Community 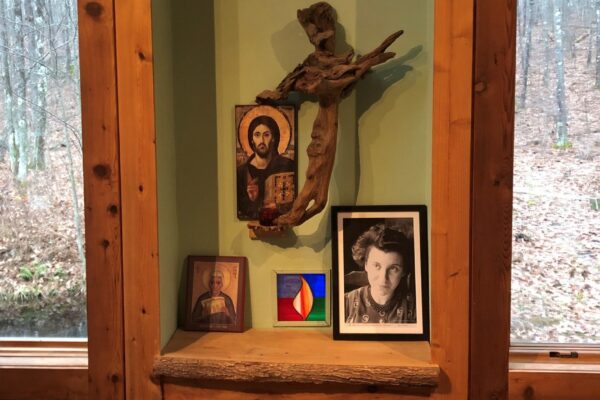