Anthony Flaherty died on July 13, 2015 after suffering a massive and crippling stroke. My relationship with him went beyond being a fellow peace activist. He was my friend, and as close to being a real brother as one can get. We communicated almost every day. We shared our despair at the state of the darkening world. Yet we were always, and Tony especially, able to lighten that despair with humor, both being war veterans often the black humor of the military, but humor nonetheless. After my morning diet of radical blogs and news sites, I would usually call Tony and we would share our thoughts and our rage.

I had deep respect for him, especially his unflinching honesty and his capacity to be upfront and straight with me, even when it was occasionally painful. With Tony you never had to figure out what he was trying to say. He said what he meant and meant what he said. He helped me personally face some serious problems, and just for that I will be always grateful.

Some may have been put off by Tony’s fierce resolve and impatience with compromise. Not I. I saw in it his strength, and he brought that strength to his politics. He took into the resistance struggle in this city something called in the military “fighting spirit”. This may seem an oddity to be discussing with reference to peace activism. Yet Tony understood that you cannot achieve peace without confrontation, without disobedience, without upsetting order, something the once powerful peace movement in America seems to have forgotten.

On another level, I had great respect and admiration for Tony because he, although not one to draw attention to himself, related to me a little of where he came from. He was the product of grinding poverty in a place called South Boston. He grew up hard, in the gangs, fighting his way out of bars in the savage culture of probative masculinity ramped up by alcohol. Yet he had achieved many decades of sobriety and made major contributions to the struggle against the scourge of alcohol and drug abuse. I understood that Tony’s fire came from his experience of life. For him, class and the particular way it seduces or forces youngsters into military servitude was not an abstract issue. He brought that fire into veterans’ peace activism and became an important leader in moving and shaking the ongoing struggle with militarism in Boston.

He took that struggle into the community where he lived and which was his roots, a community which has a strong streak of blind, aggressive patriotism, and he was made to suffer for it. Yet he never yielded, he never bent, he was never cowed into silence.

We can learn much from Tony’s legacy. All of us. However we may interpret it, or whatever language we use to discuss it, we are viewing with alarm something sinister stalking our country and the world, that is those of us who are not insulated by obscene wealth or obsessed with consumerism or compulsively distracted by the endless loop of entertainment and spectacle or who have not sought escape in the false world of abusing substances. Tony showed us something of what it will take to resist these forces, a combination of compassion, reckless courage and passionate resistance. We would do well to take inspiration from him.

Tree Planting for Tony Flaherty and Veterans for Peace

Agape planted a pin oak tree in memory of our friend, Tony Flaherty, (July7, 1931-July 13, 2015) and to honor Veterans for Peace and The Smedley D. Butler Brigade, chapter of VFP in Boston on Francis Day. A key organizer of the alternative St. Patrick’s Day Peace Parade in Boston, (from which VFP has been excluded for years) Tony ‘s voice is stilled but his spirit lives on.

A special friend of Agape, the last time we saw Tony was at a public witness at Moakley Courthouse against the execution of Dzhokhar Tsarnaev. The oak symbolizes the “strength” needed for the transformational and painful journey of a life of peacemaking that Tony so nobly represents. 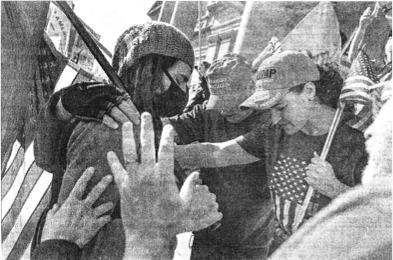 Finding a New Way of Being – by Dixon George