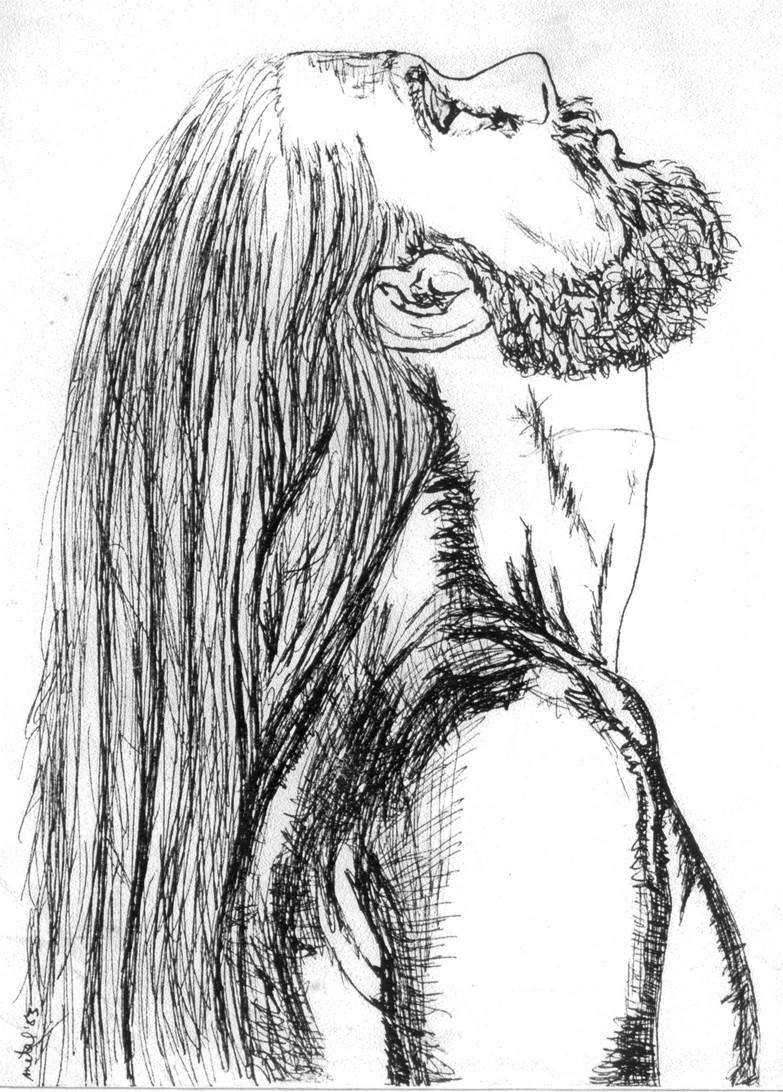 After voting for local candidates, I spent the remainder of Election Day fasting alone in our hermitage. I sought relief from the hellish fixation of a presidential campaign.  The next morning, I came down at 5am to drive to Boston to be in a meeting supporting our Iraqi Family with Sabah and his Family. As I drove off I thought of every excuse not to turn on the radio, but I eventually did.

The announcement cleaved my soul.  “Trump was the winner.”  A lightening rod of shock and disbelief compelled me immediately to switch the station to WUMB the Umass Boston Radio Station for some “political music” equal to this political tragedy.  The song  playing was “I Can See the Darkness,”  by Johnny Cash about two men who have trapped  themselves in “darkness,” desperately longing to escape to… peace.  The song conveyed my identical mood — I was covered over in darkness, needing to escape.  Emotionally frozen, I decided to continue the fast.   It’s best  to meet tragic news with self-denial and  an empty stomach.

In “bad” election year outcomes, I usually fixate on the bad traits of the bad news winner.  This was a different moment.  I felt the grip of descending darkness, 59 million people voting for Trump: a woman hating abuser, immigrant and Muslim scapegoater, torture advocate, proponent of murdering the families of “terrorists,” and in general, meeting everyone in his way with his bullying swagger.  No way that hate could win. But, it did?

And What Do We Do?

Analysis of this dreaded moment was helping me to cope, somewhat, in understanding just what happened and why.  But endless analysis led me inexorably to increased rage.  I had to go deeper just to survive my own darkness.  After I left the meeting with Sabah and his support group, I went for spiritual direction at St Joseph’s, the Trappist Abbey in Spencer.  Fr James, my director, inquired: “How are you doing with the election?” It was a relief simply to hear him ask. To be in deep spiritual counsel in a monastic setting was the grace I needed at this moment of sheer pain.

Our discussion immediately fixed on Jesus with Fr. James’ first offering:  “Jesus fully expects this political chaos and violence; indeed he is often victimized; yet that is where we must go now.”  In the midst of political “warfare,” I am tempted, along with the multitudes who oppose Trump, to reduce this tragedy to the bad guys beat the good guys.  We will repair bad politics with good politics. James countered,   “We must act as if everything depended on God, every minute and that is not merciless politics.”

At this moment, I can relate to the Zen saying: “The art of not knowing.”  In the early stages of feeling overwhelmed with tragedy, we often do not know what really just happened, have no idea how to respond. We are numb.  Never been here before.  I sense these initial days need protective silence, extended time and space, deep spiritual discussion with soul friends and the guidance of Scripture.  Without these, our collective anger and depression will cloud over any wisdom that otherwise would surely move to the surface of consciousness.

First order of practical spiritual business is to beware of hating the hater and of projecting our own darkness onto Trump. Feeling trapped by my enraged mind only serves to yield up cruel fantasies.  Anger, simply, is not going to be radical enough.  Fr. James recommends I start with the improbable. “Pray for Donald Trump as a wounded angry man himself.”  I do reason that if Trump is hate-filled, which his words and tone suggest, then he is suffering.  Yet, in my need, I am more inclined to pray for myself. I say the “prayer” from James Taylor’s song “Fire and Rain”– “Won’t you look down upon me Jesus, you’ve got to help me make a stand.  You’ve got to see my through another day.”  I can acknowledge first things first–I need to be saved from myself.

Two days after the election, the daily scripture at Morning Prayer offers light on “how to be.”  I listen to Jesus in Luke’s Gospel and find him prophesizing to his disciples, predicting that “he would go up to Jerusalem and be delivered to the Gentiles, mocked and shamefully treated, spit and scourged and killed”( Luke 18:31-32).  If we surrender our lives to Jesus and his teaching, our political wisdom and compassion, fallible as they may be, will incur the same rejection.  We are compelled to follow a “man of sorrows and familiar with suffering” (Is 53:3).

Scripture the next day was providential–the epistle under the pen of 2 John, a letter addressed to a local church:  “to the chosen… who have come to know the truth; and are walking in the truth as we are commanded of God.” (2 John 1-4).   The verse continues with a request the author says is not new:  “Love one another,” an echo of the commandment of Jesus in the Gospel of John:  “Love one another as I have loved you” (John 14:34).  All life is sacred and cared for with nonviolent love, compassion and mercy, especially directed at enemies.

But how do we walk that love in truth as children of God in this moment with a dangerous demagogue as president elect?  2 John continues:  “Many deceitful men (in this case the pronoun works literally) have gone into the world who deny Jesus… they are the spirit of the Deceitful One” (1 John 2:7).  The elder is requesting that in Jesus we risk the excruciatingly tight rope of living the prophetic truth of the gospel with disregard to all consequence.  But it must be impeccably guided in the name and the spirit of Nonviolent One.

Merciful love in the face of deceitful lies, racially bigoted language, misogynist behavior, all for vanity and political gain is, now, more necessary and relevant, not less.  The stumbling block, staring us in the face, traps, humiliates, defeats us.  Did we cling too tenaciously to the hope that good politics will defeat or over-turn bad politics?  Is what seemed axiomatic now hopeless?

In an effort to be consoling, my neighbor Bob said to me: “Don’t worry, it’s only four years.” But we must ache for something more than waiting Trump out and learn to hope in something far greater than conventional politics.  2 John instructs: “Look out that you yourselves do not lose what you have worked for. Only those who keep what Jesus taught can have Jesus within them.  If anyone comes bringing a different doctrine do not receive them. To greet them would make you a partner in their wicked work.” (2:9-11)

I remember a close priest friend, Jesuit and pacifist, Dick McSorley, who offered me a moral foundation for Christian ethics:  “If you know in a good and clear conscience that some behavior or attitude is morally wrong it is a Christian obligation to reject that behavior or you are knowingly and consciously cooperating with that wrong.”   2 John mirrors this truth.  Yes we have to love a person who has made himself an enemy of the people, a dangerous enemy at that. But love’s truth is–we can’t cooperate with him (greet him) because then we will become his willing pawn (partner) in his wicked work.

When Does the Noncooperation Begin?

Everything about Trump is historic.   Morally repulsive to hear, he makes consistently disgrace-filled comments about the vulnerable and the oppressed.   His denial of climate change is, end of the world, catastrophic.  Tens of thousands of his opposition took to the streets the days (and now weeks) after the votes were counted.  That too, is without historic precedent.  The “when” of resisting Donald Trump and everything he stands for, has already been voiced.  It was immediate. But a dead serious non-negotiable warning precedes all activism. Non-violent tactics, spirit and discipline must accompany all of us if we continue to fill the public squares.

When George Wallace was running for president in 1968, Mohammed Ali said, in effect, that Black folk felt like they knew exactly where they stood with Wallace’s kind. It was painfully clear.  They were without illusions.  Too often the average liberal or white power-broker from the North could not be trusted or counted on.  An analogy can be made to Trump.

The blatant wrong of demagogue Donald Trump is unambiguous, making it a clear call to say “No” to him.  Can these next months and years ahead be just like Trump–historic–a kairos moment that has arrived, unique in American politics?  Can we find the courage to oppose the “deceitful one”, walk and speak truth to this brazen and ugly power with steadfast and perhaps costly nonviolent love?

Jesus triumphs over evil and death with his nonviolent suffering and death.  In His resurrection, why didn’t the God of Israel defeat evil once and for all?  Did God fail us?  Why does evil still exist?  The New Testament clearly states the cross and resurrection represent a victory over evil.  Yet victory’s completion depends on the Divine Love burning within us, the Spirit guiding us onto the same road to suffering love. Teresa of Avila urges us, “God has no hands but ours.”

These times could be ones of prophetic conversion, to wake up a sleepy, distracted youth, move them away from their screens and into the streets and to learn how to resist these lies with crisis-urgency.  Indeed, all age groups, especially elder nonviolent activists like ourselves, must recommit our resistance to a deeper risk-taking.  We need not fret about what to actually do but only to “have ears to hear.”   In our listening silence, we should not be surprised if we hear Jesus speaking:   “Hypocrites, you know how to interpret the face of the earth and the sky.  How is it that you do not know how to interpret these times?” (Luke 12:54-56).

Resistance to Donald Trump is already a national movement in embryo. Cities and Universities around the country have declared themselves places of “sanctuary” in response to Trump’s threat to deport all undocumented immigrants. At long last, we as a people will begin to see that the oppression of class, race and gender prevents us from forming what all of humankind truly desire–the coming of the Beloved Community.  A Trump presidency just might finally convert enough of us to form this spiritual bond.