The Agape Community grew this week not only in numbers, but also in smiles and vibrant, youthful energy. On Monday, July 12th, Steve and Nancy James, part of the original founding group of the Community, arrived in the evening just in time for a weekly Mission Council Zoom meeting. The next night, John, Courtney, Oliver (9), and Luca (6), (the “Jurcheck Clan” as they call themselves), pulled up to the gravel driveway of Agape in their Vanagon. This time, they brought along with them Shenny, a photojournalist who currently lives on Martha’s Vineyard. In the morning, all eleven of us gathered in the chapel for morning prayer and made several reflections regarding the wisdom and gifts that children of all ages possess. After prayer, we went outside with drums and tambourines in hand, singing joyfully. Like a small marching band parade, the group then continued past the Vanagon, singing “Time to get up, Luca and Oliver!” After a breakfast filled with flavorful, fresh summer fruits and Nancy’s homemade granola, John, Steve, and Mallory (one of the summer interns), split and stacked wood at the back of Brigid House. Meanwhile, Louisa (the other summer intern), and Luca gathered fresh raspberries from the garden, mesmerized by sight and sounds of the bees and beetles that buzzed around us.    After a picnic-style lunch outside at the table overlooking the Agape pond, Louisa and Mallory raced to gather materials for a vigil taking place in Boston at the Cathedral of the Holy Cross. This vigil served as a calling to the Pope and the Catholic Church as a whole to follow through with reparations crafted by Native Americans. The two interns quickly pulled together a poster expressing solidarity for Native Americans burdened with the loss of their ancestors, as well as the continued threats to their cultural heritage, due to forced enrollment in residential schools. At the vigil, they had the chance to connect with protestors from an array of backgrounds, including a local Protestant priest. Following the vigil, a reflection circle took place just outside the doors of the Cathedral. All members of this circle shared who they were and why they came to the vigil. 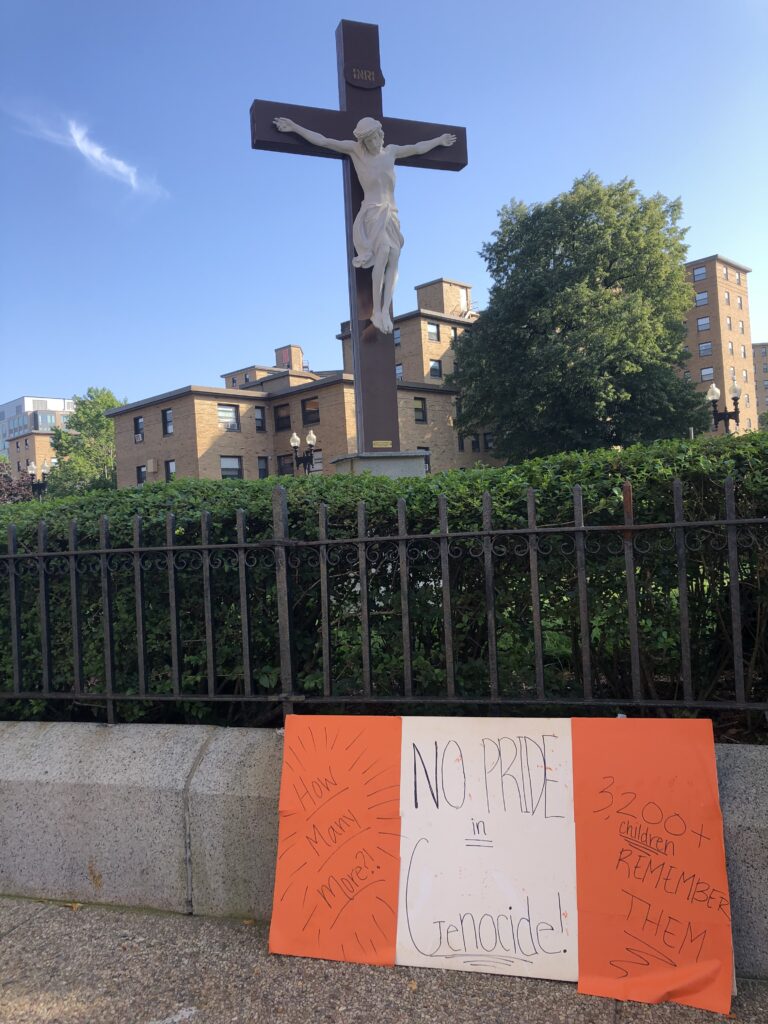 After a day of connection and solidarity with like-minded people passionate about righting the wrongs of the Catholic church, Mallory and Louisa headed back to Agape while the rain poured and the thunder boomed. Summer fun with Luca and Oliver ensued once they arrived back safely.