Throughout the fall, we at Agape have been reading Pope Francis’s recently released encyclical, Fratelli Tutti, as part of our noonday prayer. Before eating lunch together, we gather in the living room of St. Francis House and read an excerpt from the encyclical. We sit with the impact of Pope Francis’s insights in the silence that stretches between two taps of a singing bowl.

In Fratelli Tutti, Pope Francis explores the possibility of promoting a just society while cultivating a “social friendship” that “excludes no one.” He reminds his readers that he has “frequently called for the growth of a culture of encounter capable of transcending our differences and divisions.” Throughout the encyclical, Francis attends to the unjust structures that prevent an authentic transcendence of division. He also attends to the link between attuning to God’s presence and moving from interpersonal division to collective connectedness. As Francis has it, “the effort to seek God…helps us recognize one another as travelling companions, truly brothers and sisters.”

While moving through the exceedingly divisive and pivotally significant 2020 election, members of Agape have been seeking God and standing for a peace that exceeds divisions. Our quest for this wide, deep, and divinely derived peace has interwoven with our commitment to resist the systems of injustice that plague our world. Jesus and the long line of God’s prophets, including St. Francis and Pope Francis, show us that such systems of injustice prevent authentic peace from blossoming, and that we can never be at peace with them.

Jesus and the prophets also show us that our efforts to turn over the tables stabilized by these systems must intertwine with our efforts to set alternative tables: open tables conducive to justice and communion. Our work to turn over old tables while setting better ones must be rooted in a peace that is deeper than the apparent order and stability of the status quo: the peace of God, in which all divisions are healed. In the atmosphere of this peace we can recognize a widening web of beings as “brothers and sisters” and “traveling companions” on the way to a new world marked by mutual flourishing.

A “Walking-Prayer” and a Car Rally

On October 17th, Agape Community joined members of the Interfaith Opportunities Network (ION), the New England Peace Pagoda, and other area faith communities and activist networks for “400 Years: Truth & Healing for the Next Seven Generations.” The event opened a space for “listening, connecting, and acting for justice” during the 400th anniversary of the landing of English colonists on Native soil in the Northeast. It was organized by ION, and it coincided with the Peace Pagoda’s “Listening to the Call of the Great Spirit” walk, a ritual which the Pagoda refers to as a “walking-prayer.” For the past five years, members of the Pagoda have undertaken walks specifically aimed at unveiling the history of colonization, while opening up “a path of transformation and healing of the pain and patterns of ‘power over’ unleashed in this history.”

A number of us from Agape joined the group of masked and socially distanced walkers at the Woolman Hill Quaker Retreat Center and proceeded to weave our way through Greenfield, MA, marveling at the vivid flashes of red, orange, and yellow in the trees surrounding us. The steady rhythm of drums and the chanting of “Na Mu Myo Ho Ren Ge Kyo,” a mantra intended to carry the essence of the Lotus Sutra, threaded our steps together. Our walk was punctuated by prayerful stops at several religious sites, such as the Second Congregational Church of Greenfield, the Episcopal Church of Saints James & Andrew, and Temple Israel.

A deeply dissonant and disturbing experience unfolded when a Trump 2020 car rally blasted through Greenfield. We suddenly found ourselves walking through fervid chants, the revving of engines, the honking of horns, and an aggressive stream of flags. In the midst of this chaos, we kept on walking, drumming, and chanting, but I found myself emotionally frozen. My stomach was flooded with a feeling that was nearly identical to the one that hit me four years ago, when I heard that Donald Trump would be our president. I formed my fingers into an inauthentic and mildly aggressive peace sign and flashed it at the car parade.

Our walk ended with a gathering at Unity Park in Turners Falls, the site of the 1676 Peskeompscut massacre. We heard stirring reflections from David Brule of the Nolumbeka Project and Sr. Clare Carter of the Peace Pagoda. John Sheldon closed the event with a live performance of “The Same Water,” a song written to convey the spirit of Standing Rock. Sitting by the shimmering Connecticut River, we joined him in singing the chorus: “We live under the same sun, we drink the same water, in water we are one.”

Standing for Peace in Ware

Dan Berrigan’s pithy-prophetic instruction to “stand somewhere” is frequently quoted at Agape.  This fall, after weeks of collective reflection, we decided that we would stand in downtown Ware with a banner reading: “God’s Peace Heals All Divisions.” Despite a firm and fervent opposition to the Trump administration, our intention in holding this vigil has always been to offer the “good news” of God’s peace into the chaotic clash of emotions, opinions, and positions surrounding the election, and to connect with our neighbors in this atmosphere of peace. 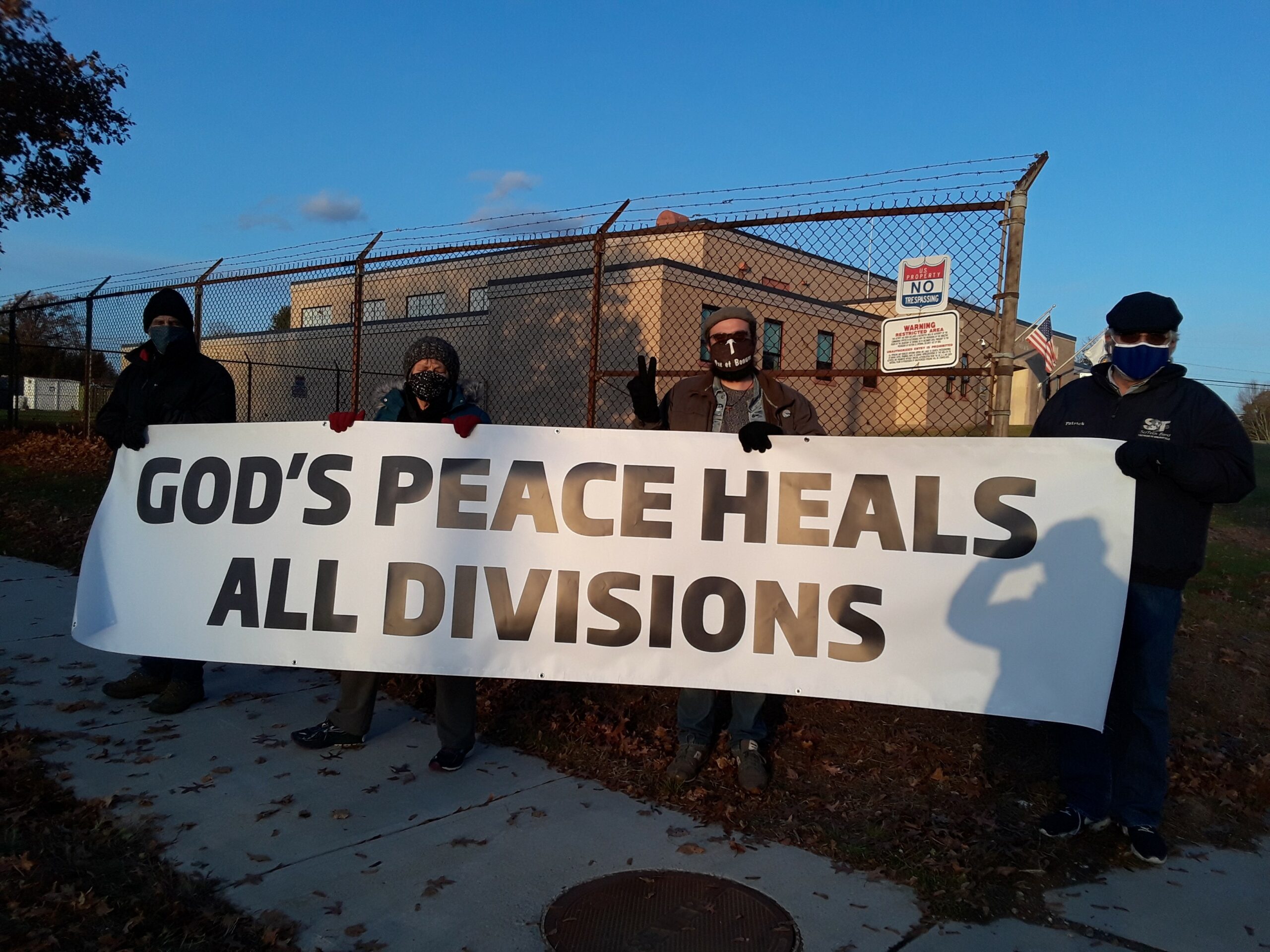 The Sunday before the election, we committed ourselves to a silent Sabbath to center ourselves in God’s peace. Our intention to prayerfully immerse ourselves in this peace, which, as St. Paul has it, “surpasses all understanding,” has inspired our response to the election, including our vigil.

On and beyond election day, various members of the community have been maintaining our vigil in downtown Ware. The banner that we are standing behind, and the message that we are standing for, has opened a space for us to authentically encounter the people passing by, the people God has put in our path. We are meeting, even if only for a briefest moment, in the open field of God’s healing and transforming peace. The smiles that light up faces, the reciprocated peace signs, the fervent honking, and the liberating and life-giving energy that passes between us has served as a nourishing foretaste of God’s coming Kin-dom, which is breaking into being here and now, in Ware and everywhere.

While living at Agape in the weeks leading up to and following the election, I have been viscerally struck by the fact that an authentic quest for peace requires both an active grappling with systems of injustice as well as an internal conversion away from the patterns of seeing and being that break me from others. Relatedly, I have increasingly come to sense that as I work on resisting and transforming unjust systems and distorted patterns of seeing and being, I also need to work on loving the actual persons embedded in them. Grounded in God’s peace, I must learn to see a widening web of beings as “brothers and sisters,” and as “traveling companions” on the path to justice and joy.

Jim Robinson, a member of Agape Community’s Mission Council and a 2021 GreenFaith Fellow, has spent three months living at Agape this fall.