While walking down the streets of NYC, I witnessed with ease how other peoples’ conscious or subconscious thoughts played out before me.   I cannot recall when I became of age or when I became aware of my “place” in society.  I thought I was obscure, invisible, undetected, yet time and time again, street after street, city after different city, people acted as if they knew me. 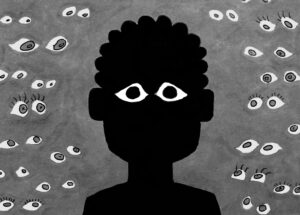 The scene would play out over and over like a broken record.  In the minds of the observers, I was the menacing antagonist, the savage rapist, the brute, the thug, the thief, the drug dealer, the vile not-human who would pounce upon my prey (them) with unreasoned and precise incision.  As my path drew closer to those who were observing me, slight gestures would occur unbeknownst to an inexperienced, uncaring eye—a tuck of a chain into a shirt, a clutch of a purse, the hasty crossing to the other side of the street, or a sped up walk.

Imagine, if you will, this scenario happening 365 days a year for 30 or 40 years.  Don’t even get me started about walking into a department store! I would constantly ask myself: Do these observers know me?  Do they know Edgar the preacher, fireman, teacher, farmer, father, husband, human being, and child of God?  Or do they only want to see and know the racist, stereotypical image of my and other’s darker hued skin?

Jesus spoke to His disciples about the deafness and the blindness of heart of the early Israelites and Jews in His present time.  When speaking of prophesy fulfilled, He quoted the prophet Isaiah saying: “You will indeed listen, but never understand, and you will indeed look, but never perceive. For this people’s heart has grown dull, and their ears are hard of hearing, and they have shut their eyes; so that they might not look with their eyes, and listen with their ears, and understand with their heart and turn— and I would heal them”. (Matthew 13:14-15 – NRSV)

With the death of George Floyd, for the first time in a long while, white Americans’ eyes, ears, and hearts have been awakened to the vicious, brutal, evil system of racism.  Some have taken to the streets; others would rather go back to sleep.  I ask you reader, are your eyes opened or closed?  Are you willing to see and hear the pain and suffering of millions which began when human beings were brought to this country in chains like animals?

Growing Up Poor in Harlem and Brooklyn

As a child, I grew up poor and on welfare in Harlem and Brooklyn, the eighth of eight.  Contrary to the stereotypical image of African American mothers on welfare as “welfare queens,” my mother worked hard all day, every day, to feed, shelter, and clothe us.  We were homeless and fatherless for a time, but she always pushed us to know and love God, each other, and to go after our education.  After graduating from college, I thought I knew everything and that I could take on the world.  I was taught some Asian and lots of European history.   I knew white poets and authors.  I knew King’s “I Have a Dream” speech.   I knew White American history, but if you ask me if I knew myself, there would be a pause.  I did not know myself because I did not know my history, my cultural history.

I had low self-esteem and self-worth because I did not have an identity.  It had been stripped over centuries since slavery.  I internalized every negative image of Black America without question, every aspect of this society that says you are less than.  Can you see these negative black images in magazines, television, and the movies, in healthcare, jobs, and housing? Can you see what we have been trying to show you year after year, century after century?  Can you hear our black voices cry out?  If not, look closer and listen more carefully.

My naïveté was stripped when I went to the Alex Haley farm in Tennessee from 1997-98, to learn how to teach youth in the Freedom Schools which began in the 60s during Freedom Summer, a time when people in the north went down to the south to help with voter registration, and desegregation. In the original Freedom Schools, instructors taught the young people reading, writing, and arithmetic because of the Separate but Equal Supreme Court ruling, as well as Jim Crow laws, which denied Black children an opportunity for a decent education.

When I arrived at Freedom Schools, I taught students critical thinking and their cultural heritage:  that our black or African heritage did not begin in bondage with slavery.  We come from a rich, beautiful, creative, distinct, African cultural heritage that helped to build the world, from a land rich in natural resources and from a lineage of kings, queens, and early civilizations.  Have you learned of this African American History while you were in school?

At the Alex Haley farm, where I told my wife, Ann, (my girlfriend at the time), that I think we should break up.  I called her from Tennessee to say “I don’t think we can be together, because how am I supposed to look young African American girls in the eye and say you are beautiful, uniquely created and special while dating a woman who is White?”  This pained me deeply and I thought God wasn’t with me. Yet by the time I left, I felt God without a doubt say to me: “It’s ok.  I am with you and I want this union to happen.”

God is the deciding factor, not me or world opinion.  God is the end all and be all.  Without the love of God in all of us and the love of God in our hearts, we cannot see, hear, or love someone else.  The evil of racism can only be conquered in the way of Jesus’ love or nonviolence.  I ask you reader, what is your personal relationship with God like?

Edgar Hayes was an intern at Agape in the 1990’s and serves with his wife Ann as a member of Agape’s Mission Council Advisory Board. Modeled after Agape, Freedom Farm, focuses on nonviolent education, gardening, healthy eating, and is open for visits, internships, and volunteering.