Racial Justice for the Indigenous People: Change the State Flag of Massachusetts 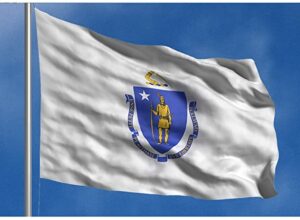 Sometime in the middle of 2016 , as Native activists and their allies struggled through an emotionally charged series of public hearings to get across to our beleaguered school committee the gross iniquity of our high school – named after Captain William Turner, the leader of an infamous dawn massacre of Native refugees camped on the Great Falls on the Connecticut River in May of 1676 – calling their sports teams the Indians, an indignant white alumnus stood up and demanded:  “If we have to change our mascot, why doesn’t the state of Massachusetts have to change theirs?”

He was pointing toward the state flag, which stands, furled in shame, on the corner of the Turner’s high school stage, as it stands on the side of every school auditorium stage, every town hall meeting room, every courtroom dais in the Commonwealth. A moderator unfurled the flag so we could all get a good look at it: the white hand holding a Colonial broadsword poised to strike the head off a composite figure of a Native man, with the Latin phrase scrolled beneath: “Peace Under the Sword…”

I thought, the man has a good point. Ever since, I have been doing what I can to change this hideous state symbol of white supremacy, so that it may no longer be taught to our grade school children, passing along old prejudice in the noxious, centuries long tide of racism in which our ancestors first sailed to greet their Native hosts on the shores of this beautiful continent.

On the eve of the decisive 6-3 vote to retire the Indian mascot at Turner’s High, former Gill-Montague superintendent Michael Sullivan remarked, “Our review process has… revealed that Native American mascots have helped legitimize and perpetuate harmful racial stereotypes and that these symbols exist within a context of historical oppression against Indigenous people, including an act of tragic violence that occurred right in this community, only to be followed by centuries of ongoing assault, subjugation, and dispossession…. That we did not understand these things in the past need not be anyone’s fault, but if we do not act upon what we understand now it will be a lost opportunity to be our best selves.”

Now, as the statues of conquistadors come down in New Mexico, as the hidebound Washington NFL football team agrees to change its name, as statues to Confederate generals who fought to keep African American in chains are removed from the public square, as the state of Mississippi votes at long last to remove the Confederate Stars and Bars from its flag, Massachusetts is left alone among the 50 states still upholding a flag of overt white supremacy.

Although our school district, with the help of Native activists, succeeded in removing the offensive “Indian” logo from its high school banners, nearly 40 other public schools in Massachusetts continue to cling to racist, often cartoonish, Native sports mascots. Last year, the state of Maine, once a colony of Massachusetts, voted to approve a statewide ban on the use of Native sports mascots in all its public schools. If Maine can ban racist mascots in public schools – if Mississippi can take down its flag of white supremacy – why cannot Massachusetts do the same?

On Tuesday, July 28th, after 35 continuous years of stalling the bill to change the state flag and seal in legislative committees, the State Senate voted unanimously to invite Native leaders of the area now known as Massachusetts to sit with state legislators and come up with a new state flag and seal. That is a long-delayed step forward toward racial justice for the Indigenous people of this land. But the House must also act, and the governor must sign the bill, for the measure to become law. Meanwhile the bill to ban the use of Native sports mascots has yet to move forward to a final vote in either chamber.

As one of the leading legislative sponsors of the bills to change the Massachusetts flag and seal and to ban the use of Native sports mascots in Massachusetts – Sen. Jo Comerford of Northampton – said at a recent rally on the State House steps, “There is a tidal wave of justice rolling across this land – and it is about to crash into Massachusetts.”

In order to make that happen, each of you who read these words must go to the MaIndigenousAgenda.org website, and take a few minutes to access the automated letter you will find there, to let key legislators and the governor know you support these bills. This is a necessary first step toward establishing a new relationship of respect and understanding with Indigenous people in Massachusetts. We all must work to make that happen.

The past harms – the land theft, the spread of viral plagues, the despoliation of the natural world that supports all life, the enslavement of Native people, the taking of their children for enforced assimilation in white boarding schools, the continued use of racist images of Native people on our state flag and high school sports jerseys, rendering the living cultures of Native Nations in this land invisible to their cultural appropriators –  are manifold and cannot be undone with the stroke of a state governor’s pen. But now, on the 400th anniversary of the Pilgrim landing, passing these long-stalled measures number (S.2848) has been transferred to the House Ways and Means Committee, where passage is “the final step” before it gets to the floor for a full vote of the House and into law in Massachusetts is a necessary start.  Native leaders have long called for their enactment. Following their leadership on racial justice legislation is a prelude to accepting their leadership on so many other pressing issues that affect all communities in these perilous days of renewed plague, species loss, racial oppression and climate change.

Never before have we been so far from the vital truths of Nature and the original instructions of a commonly perceived Creator, which the Indigenous People of the world have kept – and may still be willing to share – with any society willing to listen. Even ours.

David Detmold is a tireless advocate for Native People and website coordinator for ChangetheMassFlag.  Please sign petitions and alert state reps in your area to the urgency of this measure.