COVID-19, Environmental Racism, and the Legacy of Dr. James Cone

Throughout the spring and summer of 2020, the radical evil of systemic racism and the death-dealing impact of COVID-19 have occupied the center of our collective consciousness. After the brutal and callous murder of George Floyd by Minnesota police on May 25, 2020, masked protesters have come out of lockdown to fill city streets, chanting “Black Lives Matter!” in the face of white supremacy. As we awaken to the fact that the pandemic and systemic racism are intertwined realities, we are also awakening to the fact that they are inextricable from our ecological crisis. 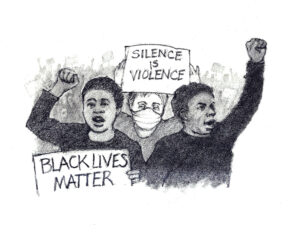 In her post, Ocasio-Cortez identifies environmental racism, as well as the related injustices of economic inequality and housing discrimination through the practice of redlining, as “underlying health conditions,” which leave black and brown people more vulnerable to COVID-19. With this in mind, Ocasio-Cortez asserts that “COVID relief should be drafted with a lens of reparations.”

Over the summer, the Center for Disease Control (CDC) released age-adjusted statistics showing that as of June 12, 2020, black Americans face a COVID-19 hospitalization rate that is 5 times higher than it is for white Americans. The CDC has identified a number of root causes of this hospitalization rate, including “institutional racism in the form of racial housing segregation.” Through the influence of the racist practice of housing segregation, people of color disproportionately live in densely populated contexts in which they are exposed to a wide array of environmental hazards. This exposure is linked to the development of the very underlying medical conditions which put people at an increased risk for a severe and potentially fatal response to COVID-19. These are the fruits of environmental racism.

As we navigate the interweaving impacts of COVID-19, systemic racism, and environmental degradation, we can find wise guidance in the work of Dr. James Cone, and particularly his essay “Whose Earth Is It Anyway?” which was published two decades ago in the Spring/Summer 2000 edition of CrossCurrents. Cone, a pioneer in the field of Black Theology, served as a professor at Union Theological Seminary from 1970 until his death in 2017. In “Whose Earth Is It Anyway?” he emphasizes the need to connect resistance to environmental degradation with resistance to racism.

Cone opens his essay with the assertion that “the logic that led to slavery and segregation in the Americas, colonization and Apartheid in Africa, and the rule of white supremacy throughout the world is the same one that leads to the exploitation of animals and the ravaging of nature.” In this respect, if we are interested in resisting and transforming either racism or environmental degradation, we must attend to the shared logic that underlies both of these intertwining evils. Cone identifies this as “a mechanistic and instrumental logic that defines everything and everybody in terms of their contribution to the development and defense of white world supremacy.” This logic attempts to deny the inherent value of black and brown bodies, by reducing them to instruments in the service of the system of white supremacy. This logic similarly impacts the “more-than-human world” (to use a phrase coined by David Abram, which uniquely evokes the abundance, diversity, and wonder of the natural world, including the vast array of beings with whom the human species shares this planet). This logic must be subverted.

It is important to note that Cone does not critique an “anthropocentric” worldview or ethical framework in this essay. Such critiques, which dominate environmental discourse, operate on the assumption that the ecological crisis is caused by the elevation of the human species and its interests above the more-than-human world. However, as Rosemary Radford Ruether has it in “Deep Ecology, Ecofeminism, and the Bible,” “all humans do not dominate nature equally, view themselves as over nature or benefit from such domination.” Like Ruether, Cone challenges his readers to recognize that the ecological crisis is simultaneously a social crisis. The ecological crisis is entangled in white supremacy, and it is driven by a mechanistic and instrumental logic that elevates the interests of particular human beings (those with access to power in the system of white supremacy) over the interests of othered beings, human and more-than-human.

In order to display how we might weave together our commitments to environmental flourishing and racial justice, Cone points to the work and witness of a number of women of color. He highlights womanist theologians, namely Delores Williams, Emilie Townes, and Karen Baker-Fletcher, who have connected resistance to racism with resistance to ecological abuse in their scholarship. He also highlights the embodied efforts of black churchwomen in Warren County, North Carolina, who lay down on a road to block trucks loaded with PCB-contaminated soil from dumping that soil in a landfill in their community. Cone notes that in the span of two weeks in 1982, hundreds of protestors were arrested, and that this incident has inspired the environmental justice movement.

In “Whose Earth Is It Anyway?” James Cone calls his readers to recognize that ecocide and systemic racism are entangled atrocities. He calls us to convert away from the instrumental and mechanistic logic which has led to the desecration of black and brown bodies and more-than-human beings, and to resist and transform the death-dealing system of white supremacy from which the Eco crisis is inextricable. May Cone guide us as we read the signs of the times and respond to the exigencies of the present. As we address the COVID-19 pandemic, may we do so with an attentiveness to its entanglement in the intertwining evils of white supremacy and environmental degradation. May we recognize, as Alexandria Ocasio-Cortez reminds us, that environmental racism is an “underlying health condition,” and that “COVID relief should be drafted with a lens of reparations.”

Jim Robinson is a member of the Agape Community Mission Council. Jim defended his dissertation, which included an analysis of Agape Community, and received his PhD in Theology from Fordham University in May, 2020.