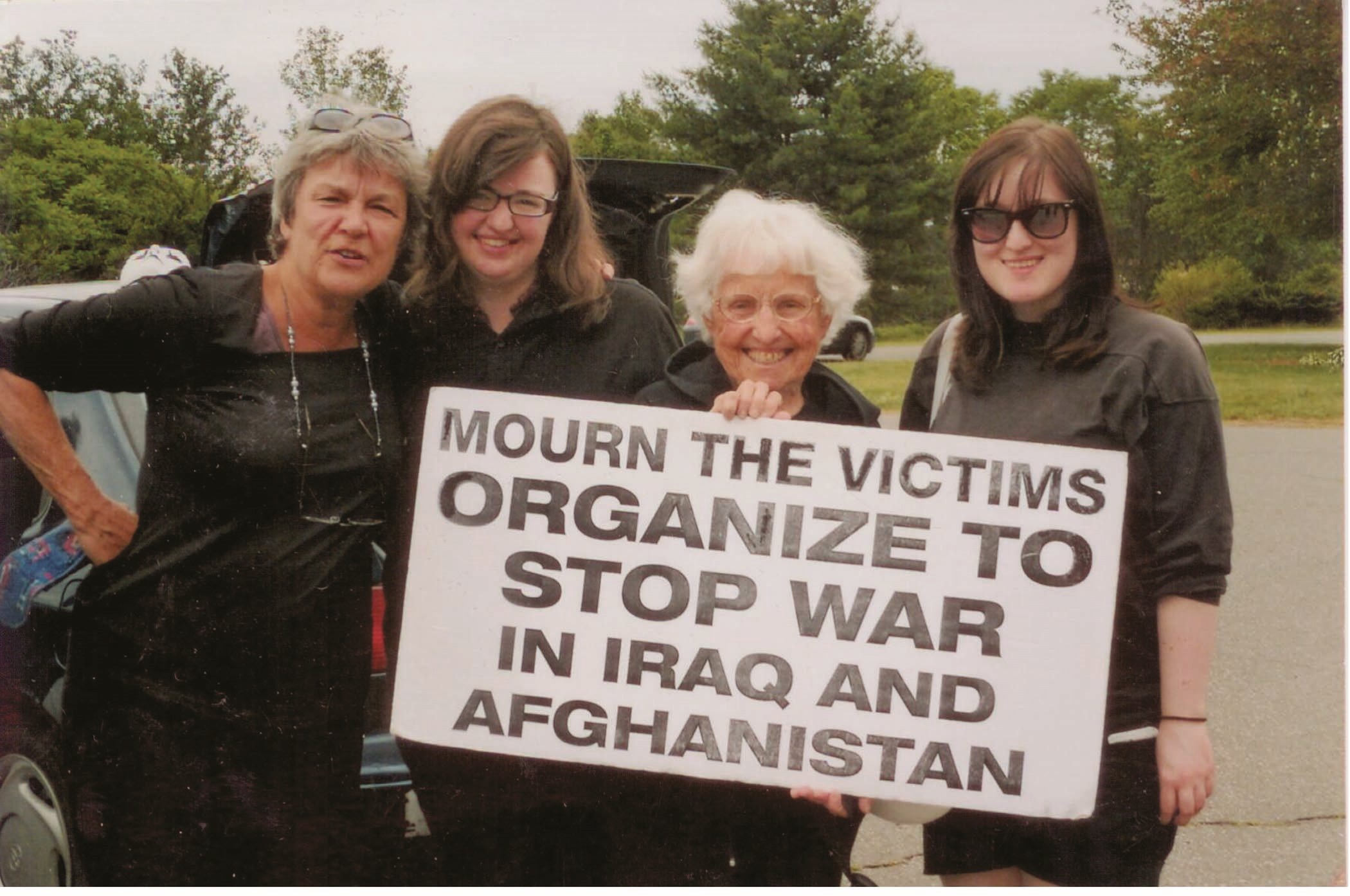 We met Frances at an Ailanthus retreat in Boston in 1982 when Paul Hood, a key member of our peace and resistance group Ailanthus, invited her to give an afternoon talk on her peace activism. Paul said Frances was an amazing force for good, “a one person peace movement.” Indeed, her force field of activism was like no other we had seen or could even imagine. This first meeting led to a deep camaraderie that has lasted more than three decades. We remember phrases of her talk: “Our protests should consist of the hard work of peacemaking which we must take as seriously as the war-makers take war.” Frances never relented in emphasizing the need for “structures and strategies” for engaging in the work of peace. She was consistently pragmatic and instructive: “We must have long term goals and short term goals to be effective.” She always had an armful of leaflets, announcements and fliers about a myriad of peace actions and movies on social justice that she had established as an ongoing event in Northampton. Her life, in short, was a tireless barnstorming on social justice issues, going back to the early 60’s. As a Quaker, her “structure” was simple—work out of your home, so she established the American Friends Service Committee office, activist headquarters for the region in Western Massachusetts. Her home office was always humming with activity, phone calls, plans for actions, and the signs to take to them. She was a “work at home” 24/7 peacemaker, who never, in all of the years we knew her, seemed tired or discouraged. She was all in for peace, hundreds of arrests and witnesses, with a smile. She carried that smile with her to Agape for almost every annual Francis Day, and at many of them, she was a speaker or respondent–clear, crisp, and challenging. She loved the fact that we at Agape made hosting college students a priority, and sent donations regularly to further the cause. This commitment to youth, stemmed, no doubt from her memorable “strategies” in her anti-war recruitment of college students as conscientious objectors during the Vietnam War. She picked up hitch-hikers in Amherst and stared indoctrinating them the minute they entered her car…always on message: “The Vietnam War is unwinnable, a cruel injustice to the people of Vietnam. You must get draft counseling and become a CO. We need you in the movement. See you at the meeting tonight.” Frances’ short-term goals were to resist and oppose every US foreign policy evil that crossed her path: US incursions in Central America, US backed invasions, apartheid in South Africa, all nuclear weapons’ manufacturing, nuclear power, pipelines, the death penalty, prison abolition, climate change and University divestment from fossil fuels. Frances was arrested in her wheelchair in her elder years. We met Frances on numerous occasions at Westover Air Base to encourage the workers there to consider the nature of their work, supplying the weapons of war in Iraq and Afghanistan. At times there were only two or three of us. No matter, “this is so important,” Frances would say, glowing when we brought two young interns from Ireland to their first protest with Frances at Westover. A week before her death at age 100, we visited Frances and together, holding hands, we reminisced with her about her three children, and her marriage of 50 years, and her staggering accomplishments over 80 years. Frances and a companion of great wisdom and depth, Juanita Nelson, were both tax refusers, women of courage, who would leave the Agape homestead, arm in arm, walking down the driveway, memorable icons and friends. Frances gazed at us from her death bed with her reassuring smile, and then proceeded to list the reasons for a national strike against corporations and the preparations for war. She left us with her boots strapped very tight. Reviewing together our four decades of friendship and the sweep of it all left us in a place of calm and resolve. We could have departed with a song on our lips: “We shall not give up the fight. We have only started.” We were content with the hands tightly held and the final thank you’s as we turned and left.