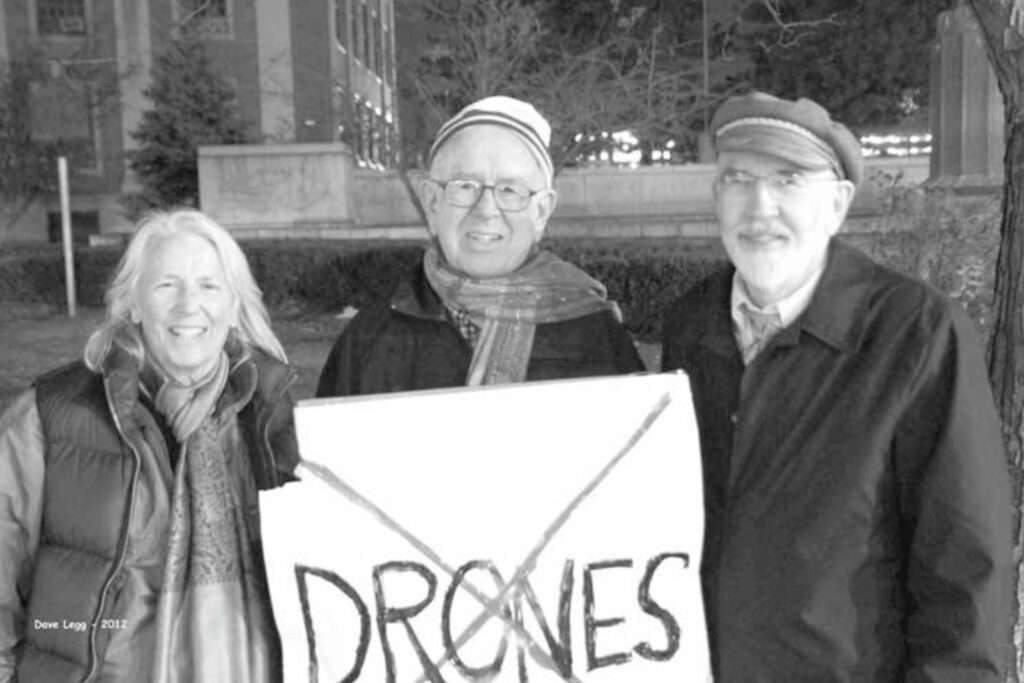 Michael True, Worcester peacemaker, poet, historian, interfaith organizer, teacher of English and model Worcester citizen is gone. He passed away last week in Minneapolis where he and his wife, Mary Pat moved just a few weeks ago to join three of their six children who have settled there.

Mike and Mary Pat were among the very first persons my wife Joanne and I met when we arrived in Worcester fifty years ago this fall. Almost before we unpacked Mike had updated us on local peace actions and drawn us into the ecumenical “floating parish”. We learned that this open-ended community had succeeded the legendary “Phoenix” storefront as home to local social activists–and lots of children.

From that period of crisis around the Vietnam War through the Plowshares and nuclear freeze movements to the 21st century resistance to unwise wars in Afghanistan and Iraq, Mike was consistent and courageous, the heart and soul of Worcester’s peace movement.

Sometimes he stood with a few Catholic Workers in lonely witness at Lincoln Square or outside a weapons research building in the suburbs. At other moments he was joined by larger crowds who agreed that one or another war was wrong even if they did not yet share Mike’s conviction that nonviolence was the surest way to a just peace.

In later years as leader of the Nonviolence sector or the International Peace Research Association he traveled the globe working for peace, teaching in China, lecturing on many trips to India, even once speaking on nonviolence in North Korea.

Mike’s peacemaking work was far from his only contribution to our communities. He was always engaged with religion, across many denominational boundaries. He enthusiastically assisted the draft counselling work organized by the city’s Catholic, Protestant and Jewish leaders.

Later when his Catholic church backed away from ecumenism Mike lent support to local Catholic Workers and drew on his close relationship with the American Friends Service Committee. Along the way he began to attend services at the local Friends Meeting. He helped lead an interfaith dialogue in Worcester schools, and later he co-founded The Center for Nonviolent Solutions which offered training in conflict resolution skills to students and faculty of local high schools.

Mike loved to break open the long ignored history of Worcester revolutionaries, abolitionists, labor radicals, peacemakers and poets and writers.  He wrote several books about local and national peacemakers and justice seekers and his comprehensive An Energy Field More Intense than War is a classic study of literature and nonviolence. It is safe to say that Worcester’s many superb colleges never had a professor who more fully embodied the idea that scholars and teachers have important public responsibilities.

Mike True loved Worcester.  Alone with a picket sign or alerting us in a newspaper column, he seemed like a prophet, but in this case a prophet who was also a good neighbor and an excellent friend. He deserves after a lifetime of service to now rest in peace. The rest of us might wonder about how we can honor his legacy. Perhaps by raising a few Mike True-like questions about spending a trillion dollars modernizing our nuclear weapons, or about our inability to find a few dollars here in Worcester to support conflict resolution training in our schools. Mike took it for granted that most of us want to do better than that. That confidence in the rest of us was and remains a gift for which we who knew him are forever grateful.

David is a devoted friend of many peace communities and also Professor Emeritus, College of the Holy Cross

Mike True gave an inspiring keynote talk for the opening of the Agape Community in Hardwick, MA in 1989, before a gathered crowd of about 400 people including Catholic Worker Tom Cornell, and then Bishop Timothy Harrington of the Diocese of Worcester, founder of the Georgetown Peace Center, Fr. Richard McSorley SJ and Fr.Emmanuel Charles McCarthy, Agape co-founder.

Mike placed Agape and many Catholic Worker communities, in the lineage of Adin Ballou and the Hopedale Community, and gave us the momentum we all needed that day, to feel part of a living, historic reality.

After that, Mike came to every Francis Day that he could attend, supportive as always from our early years together.  He sent letters and books from India, and we were drawn even closer by my friendship with Denise Levertov, whom Michael also cherished.  The line from Denise’s poem, “Making Peace”, became the title of one of his most loved books, An Energy Field More Intense than War.

Right until the last correspondence and conversation with Michael, he and I constantly referred to Denise’s poetry.  At a Catholic Worker anniversary gathering last year, a young man stood up to say that the best book he ever read on peace was, indeed, An Energy Field More Intense than War.

Presente Mike.  Thank you for your steadfast courage and sacrifice in the name of nonviolent love.