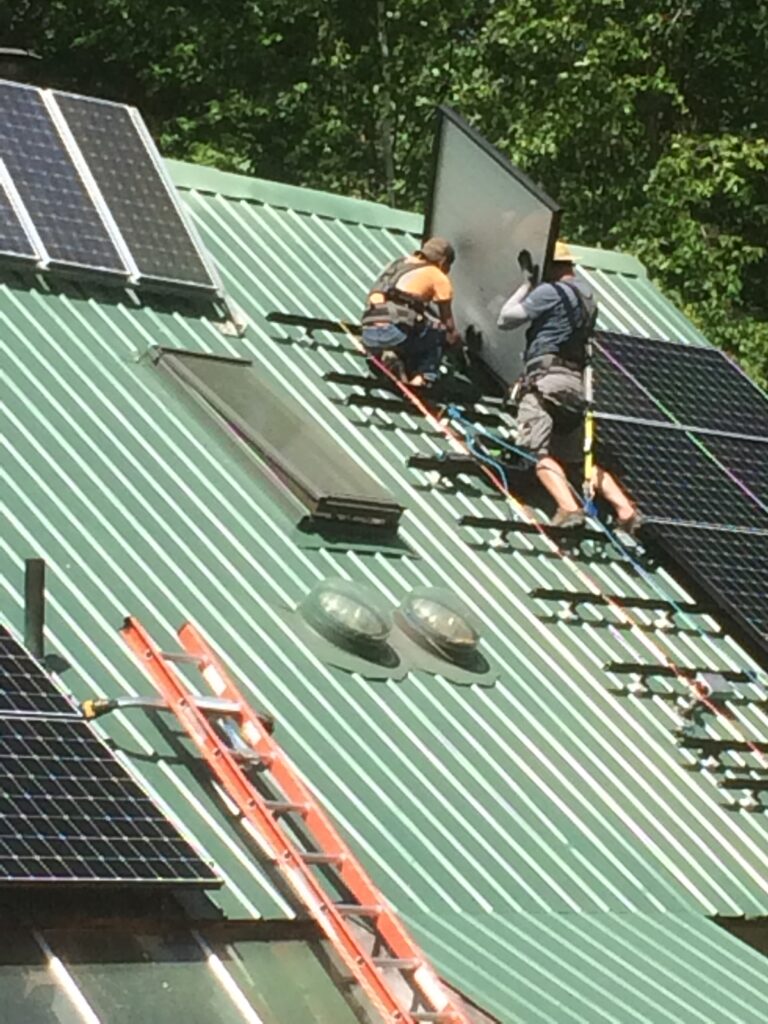 by Aria Killough-Miller “Can everyone halt?” Brayton asks. We pause from clearing lunch dishes and discussing afternoon tasks. He begins to sing “The Earth is Our Mother”. Having no idea what is going on, we nevertheless follow Brayton, who leads us into the basement toward the solar monitor. He decrescendoes the song to silence, then switches the flip to “On”. And just like that, Agape Community is now documented as running completely on solar power. Of course, there really is no “just like that” to this story. The community has been running on about half solar power for almost twenty years, since 1999 when Brigid House was first built. The dramatic doubling of kilowatt capacity, with spare energy being sold to repay half the solar installation cost, is a new development in a decades-long history. 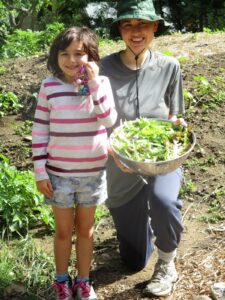 As a new intern, I try to keep that history in mind. I am a twenty-something who is just beginning to explore her life path and who follows no particular faith tradition; Agape is a 36-year-old institution run by seventy-somethings who committed long ago to a specific life path, steeped in a millennia-old religion. How does a novice step into something so time-honored? Very well, I’ve come to realize. I may be a new intern, but similarly young, inexperienced interns have been a feature of Agape since 1990. Agape is habituated to novelty, and that is not a paradox. Although twenty solar panels gleam with just-from-the-factory freshness, protecting the earth has been a feature of Agape since 1982. In a lay Catholic community, care for all God’s creations, including the Earth and all animals that depend on it, is important. Ensuring that the lives of plants and animals, including humans, continue into the next generations is important. Reinforced by the community’s embrace of Native peoples and their reverence for the natural world, sustainability is a cornerstone, and that cornerstone calls for new action.     Sometimes, growing older means growing set in one’s ways. Idealism, some say, is for young people. But Suzanne and Brayton have the good fortune of being set in their ways of idealism and innovation. The sixties hippy world they grew up in valued changing the world, and they stuck to it. It shows in their attitude toward the millennia-old book members read from every morning. To Suzanne and Brayton, the bible was not carved in stone and then locked in some archive; it continues to be read, interpreted, and practiced. In the past month, I’ve heard multiple Christians say they were raised to worship the bible, but before coming here, they had never seen it as something to live out. If God is still speaking, as the UCC slogan has it, Agape is still following instructions.   At the Mission Council’s June meeting, the community kicked off the meeting with a simple ceremony to commemorate the installation of the solar panels. Business matters needed to be addressed, just as dishes needed to be cleared at Brayton’s spontaneous post-lunch chant, but the Mission Council grabbed drums and headed toward Brigid House, once again singing “The Earth is Our Mother”. Community members offered insights, questions, and answers about the new solar panels. No matter how busy daily life gets at Agape, spiritual practices—morning prayer, midday meditation on a short reading, celebrating the installation of solar panels—insist on a place amidst routine and mundane tasks. Old values are well-established, but new energy keeps the place running. Aria Killough-Miller is an intern at Agape Community for the summer of 2018. A recent graduate of Bennington College, her pursuits include writing, music, social justice, and environmental protection.