Hundreds of people – including leaders and elders of Native American tribes from across the U.S. – assembled under a large tent at Agape, a Christian community in the woods of central Massachusetts dedicated to social justice, non-violence, and sustainable living. We were there to mark the 35th annual celebration of St. Francis Day at Agape, a thrilling, transformative day of listening, drumming, and sacred ceremony, of mourning and celebration.

The keynote speaker was Chief Arvol Looking Horse, whom I had last seen in December, when I accepted the invitation he extended to religious people across the country to come to Standing Rock for an interfaith day of prayer. A descendant of Sitting Bull, Chief Arvol Looking Horse was chosen at the age of 12 to become the 19th Generation Keeper of the Sacred White Buffalo Calf Pipe. Now in his 60’s, Chief Arvol carries his long, lanky frame with the sorrow and dignity of a person who has looked deeply into suffering and who finds hope in the wellspring of sacred ceremony and practice.

Bishop Doug Fisher of the Episcopal Diocese of Western Massachusetts, and my husband Robert Jonas, founder of the Christian-Buddhist prayer sanctuary, The Empty Bell, joined me as we presented an award to Chief Arvol, noting that members of the National Religious Coalition on Creation Care (NRCCC) come from the Abrahamic faiths, including Jews, Muslims, and Christians from various traditions – Roman Catholic, Protestant, Evangelical, and Orthodox. Every year, the NRCCC bestows The Steward of God’s Creation Award on an individual who exhibits “courage and commitment in the caring and keeping of the earth in a heroic, distinguished and effective manner.”

The crowd erupted in applause when Robert Jonas announced:  “This year, for the first time, NRCCC wishes to give its award not to a single person but to an entire people. In recognition of the spiritual and moral leadership of the Standing Rock Sioux Reservation and the Lakota, Dakota, and Nakota Nations, the National Religious Coalition on Creation Care would like to present its 2017 Steward of God’s Creation award to the Sioux Nation.”

Bishop Fisher delivered his remarks with clarity and conviction:

We are painfully aware of the history of Christian participation in the oppression, marginalization, and murder of First Nations peoples. We recognize the tragic consequences of the Doctrine of Discovery, which gave the Church’s blessing when colonialists claimed the lands of indigenous peoples as their own. The Episcopal Church has formally repudiated and renounced the Doctrine of Discovery, as have several other Christian groups. Like Pope Francis, we grieve the ‘grave sins’ and ‘crimes’ of  colonialism that were ‘committed against the Native people of America in the name of  God.’

He went on to say, “Today the members of NRCCC come to you in humility, wanting you to know that we see your steadfast courage and that we cherish your spiritual vision of an earth-centered, earth-honoring life. Yours is a vision that we want to lift up across this country and around the world. It is an honor to give you this award.”

Then Chief Looking Horse stepped to the stage and accepted on behalf of the Sioux Nation the 2017 Steward of God’s Creation Award, which reads: “Presented in acknowledgment of your inspired courage, leadership and non-violence in protecting God’s sacred land and water.”

Later that day, Christians had another opportunity to express our deep respect for indigenous peoples and our deep repentance for the ways that Christianity has been used to commit and condone genocide. Racism has been justly called “America’s original sin,” and it began with the decimation of our land’s Native peoples. As Martin Luther King, Jr., wrote in Why We Can’t Wait (1963),

Our nation was born in genocide when it embraced the doctrine that the original American, the Indian, was an inferior race… From the sixteenth century forward, blood flowed in battles of racial supremacy. We are perhaps the only nation which tried as a matter of national policy to wipe out its Indigenous population. Moreover, we elevated that tragic experience into a noble crusade. Indeed, even today we have not permitted ourselves to reject or feel remorse for this shameful episode.

Today was the day we would permit ourselves “to reject or feel remorse for this shameful episode,” an “episode” of racist domination that continues into the present, though more covertly.

After participating in a sacred water ceremony led by Beatrice Menase Kwe Jackson, the crowd gathered around the sacred fire and listened to a Mohawk elder explain the ceremony of the Great Tree of Peace. According to Iroquois tradition, the cycle of conflict between separate Nations was broken when a Peacemaker persuaded the Mohawks, Oneidas, Onondagas, Cayugas, and Senecas to unite as the Five Nations Confederacy. As a pledge of their intention to live in peace, the Nations buried their weapons under a tall pine tree.

Facing the crowd, I stood on the edge of the small amphitheater, with six Christians of various denominations standing beside me. Behind us was a deep pit in the ground and a young white pine tree, its roots wrapped in burlap, which was ready to be planted.

I called out loudly:

This small circle of Christians has gathered to pray for peace. We are painfully aware of the ways that Christianity has been used over the centuries as a weapon to justify violence against indigenous peoples and violence against Mother Earth.  We are here to express our remorse and regret for this painful history.  We are here to dedicate ourselves to a renewed quest for peace with Earth, peace with our neighbors, and peace above all with our First Nations brothers and sisters.  We are here to lay our weapons down.

Today we intend to burn the Doctrine of Discovery, a principle of law developed in the 15th and 16th centuries by Popes and European Kings, and eventually applied by our own Supreme Court. The doctrine held that Christian sovereigns and their representative explorers could take possession of lands that were held by non-Christians, and could do so with the full blessing and sanction of the Church. Much of the ongoing injustice and colonization suffered by Native Americans in this country over the past 500 years can be traced back to the Doctrine of Discovery.

Christians are awakening to the injustice being carried out under the banner of our faith. Many Christian groups have repudiated and renounced the Doctrine of Discovery, among them the Episcopal Church, the United Church of Christ, and the Executive Committee of the World Council of Churches. Two years ago, on a trip to Bolivia, Pope Francis apologized for what he called the “grave sins” and “crimes” of colonialism that were “committed against the Native people of America in the name of God.”

The time has come for all Christians and all people of faith and good will to renounce this doctrine and its violation of the inherent rights that individuals and peoples have received from God. Today we will deliver a copy of the document to the sacred fire and place its ashes at the base of our peace tree as a symbol of our intention to lay our weapons down.

One by one, each Christian speaker offered a prayer, and the crowd responded by chanting, “Lord, hear our prayer.

After praying Amen, I said, “Now with sacred fire we will burn the Doctrine of Discovery. As we watch and listen to the burning, we ask God to burn away everything in our hearts that is not love.” 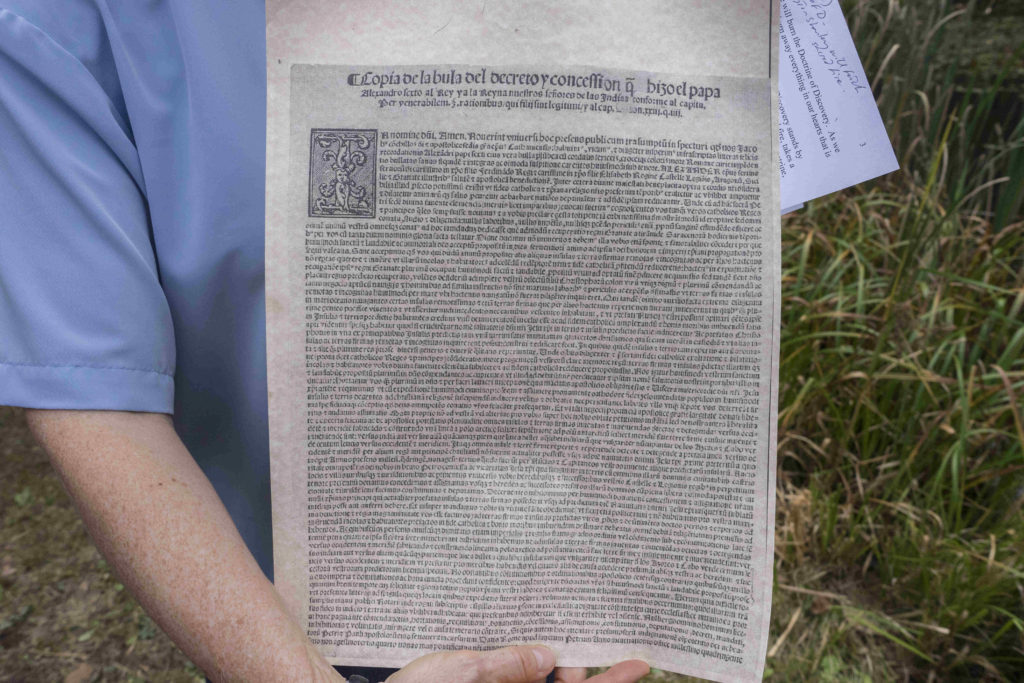 The Rev. Nathan Beale unfurled and lifted up the Doctrine of Discovery, which was printed in Spanish on yellow parchment-like paper. Brayton Shanley, one of the founders of Agape, walked down the hill to the sacred fire, lit a torch, and walked back up. The three of us bent over the pit. A violin played. I watched as the fire bit into the paper, dissolving and destroying it before our eyes. It melted away into ash, and out of the corner of my eye I saw my fellow Episcopal priest, Nathan Beale, make the sign of the cross. I wished I’d thought to make that prayerful gesture, but it was too late: I’d already pumped my two fists in the air as a gesture of triumph: the sacred fire had consumed the Doctrine of Discovery.

“Plant the tree!” Brayton cried, and at once several people hoisted the pine tree and maneuvered its root ball into the pit, to be fed from below by the ashes of a doctrine that was wielded as a weapon. May all our renounced and buried weapons turn into good compost, so that many trees of life can spring up and bear fruit! 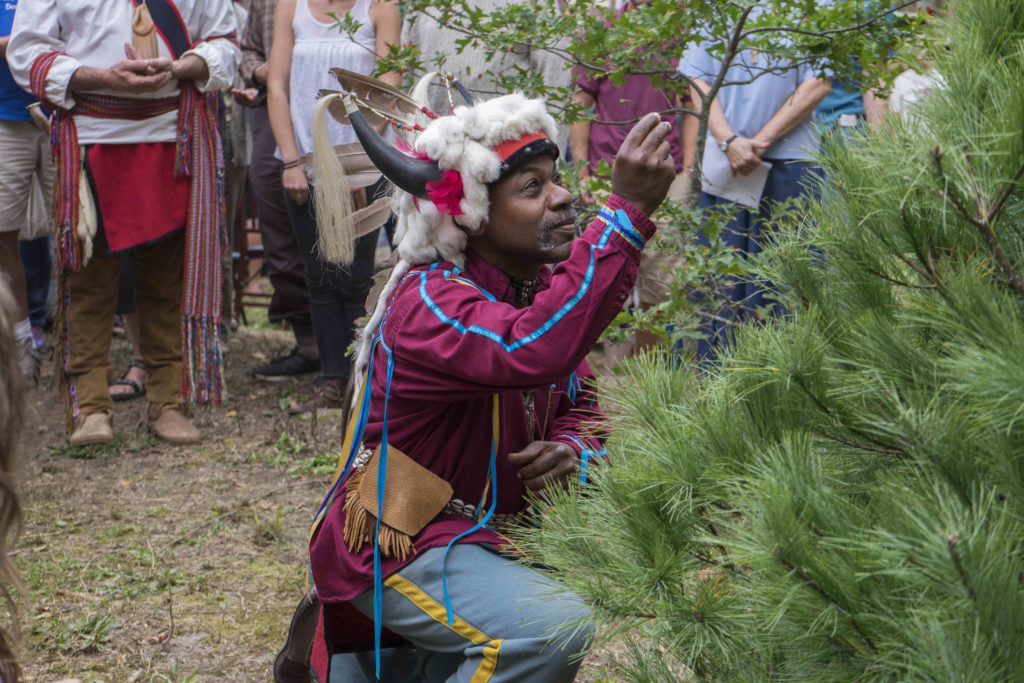 After the peace tree was planted, hundreds of people streamed up the hill, kneeling one by one to place sacred tobacco at the base of the tree, praying to release trauma and receive healing. Whatever race they belonged to, whatever language they spoke, whatever religion they held dear, I trusted that we shared a common intention: to become peacemakers and to head together toward healing and fullness of life.

An Episcopal priest, author, retreat leader and climate activist, Margaret serves as Missioner for Creation Care for the Episcopal Diocese of Western MA and for the MA Conference of the United Church of Christ, and is a dear friend to Agape.