Written by SuzanneShanley on November 28, 2017. Posted in Uncategorized

Though it is approaching two months since October 7th, we still find ourselves immersed in the significance of Francis Day 2017. Read on for a re-cap of the day.  The Agape Community’s Francis Day celebration this year saw more than 350 water protectors (more attendees than any other year) gather to honor America’s indigenous people. The theme was “Listening to Native Voices: Standing Rock is Everywhere,” and it was clear in the long line of cars parked on Agape’s wooded street and the hustle and bustle on the homestead of new faces as well as long-time Agape supporters, that clearly people wanted to listen. Sparked by Agape co-founder Brayton Shanley’s trek to Standing Rock last winter to deliver straw bales, native people from all corners of the country came to Agape to share their wisdom for the celebration on Oct. 7.

In store for the day was a speech by keynote speaker Chief Arvol Looking Horse, 19th Generation Keeper of the Sacred White Buffalo Calf Pipe. Brayton introduced him as “one of the great elders of our time.” Chief Arvol was “honored to speak” to the Francis Day crowd, and told them, “Today, I am traveling all over the world talking about who we are as First Nations. That Mother Earth is the source of life, not a resource.” You can view the keynote here:  https://www.youtube.com/watch?v=jMtJQa2UIuI&feature=youtu.be 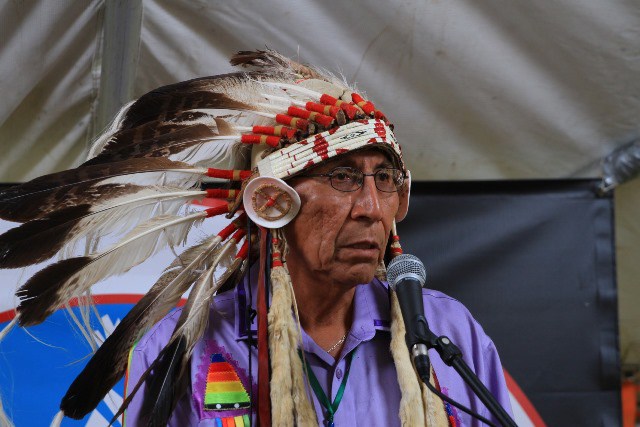 We would also like to offer the full transcript of Chief Arvol’s speech. Please scroll to the end of the blog post to view it. Thank you to David Detmold for transcribing.

A panel discussion among Chief Dwaine Perry (Iron Bear), Two Clouds and Roland Jerome was also scheduled for the event. The three explained their tribal backgrounds and shared the legal troubles they are going through, concerning a pipeline that is proposed to run from Albany, NY to Linden, NJ. Watch the panel discussion here: https://www.youtube.com/watch?v=rjSDFctRsWA&feature=youtu.be 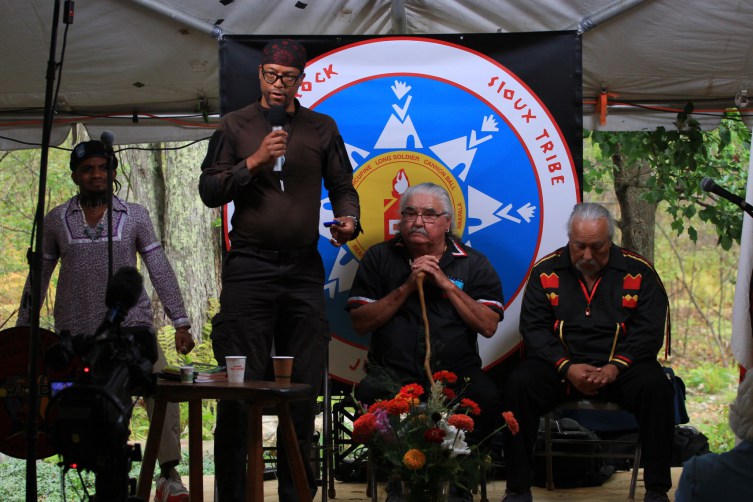 A sacred water ceremony was led by Beatrice Menase Kwe Jackson, who led the ceremonies at Standing Rock. Before the ceremony, Beatrice offered a prayer. “We thank you from the bottom of our hearts for your generosity of time, of spirit and respect.” You can watch the prayer here: https://www.youtube.com/watch?v=UV1BZFGpoqU&feature=youtu.be 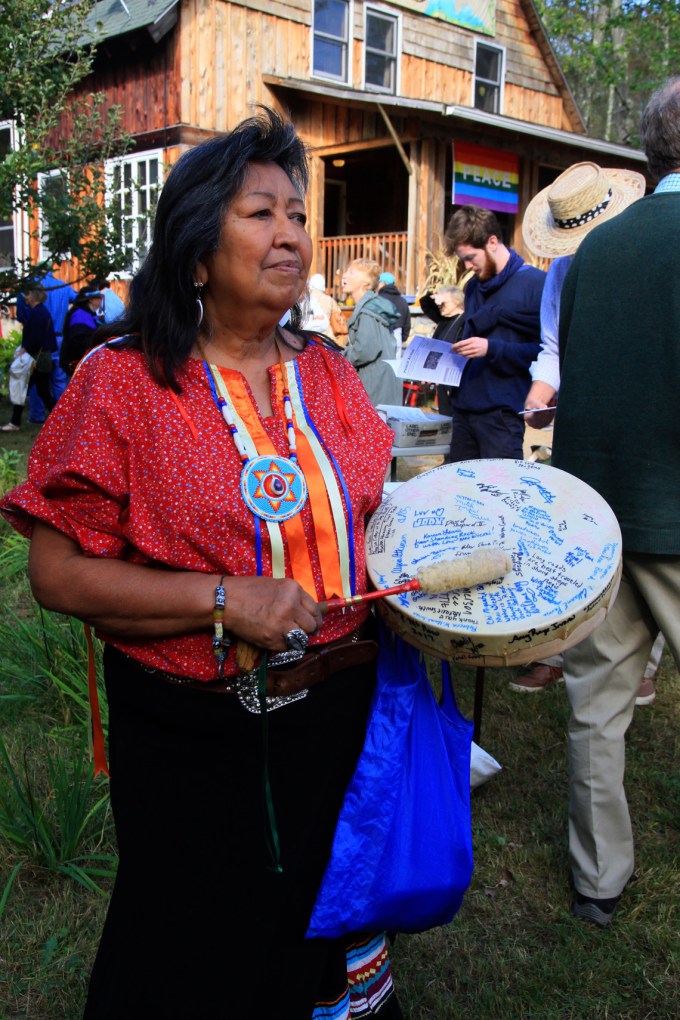 The National Religious Coalition on Creation Care (NRCCC), representing all the major faith groups in America, including Catholic, Protestant, Evangelical, and Orthodox Christians, Jews, and Muslims, presented Chief Arvol with The Steward of God’s Creation Award. Each year the award is given to “individuals who exhibit courage and commitment in the caring and keeping of the earth in a heroic, distinguished and effective manner.” Rev. Dr. Margaret Bullit-Jonas (Missioner for Creation Care, Episcopal Diocese of Western Mass. and Mass. Conference, United Church of Christ), Dr. Robert  A. Jonas (Board Chair Emeritus, Kestrel Land Trust), and Bishop Doug Fisher of the Episcopal Diocese of Western Massachusetts presented the award. Margaret wrote of her experience on her blog post (which you can read here: https://revivingcreation.org/listening-to-native-voices-standing-rock-is-everywhere/) 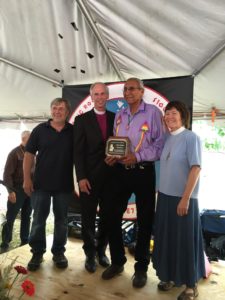 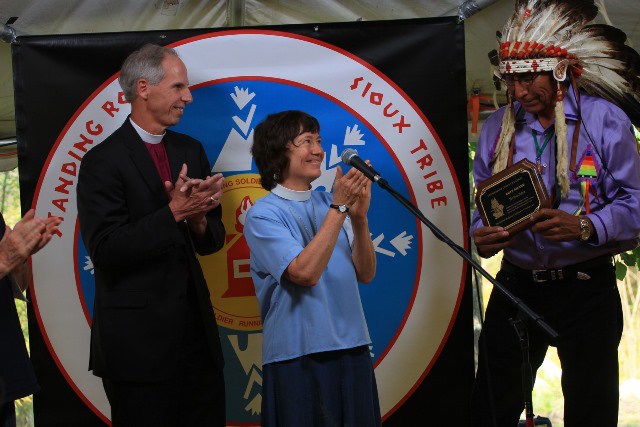 She writes that, after the “crowd erupted in applause when my husband announced, “This year, for the first time, NRCCC wishes to give its award not to a single person but to an entire people,” she and Bishop Fisher had to decide, on the spot, whether they should sustain the “joyful” mood, or “say the hard stuff.” They decided to press on with what they needed to say.   Bishop Fisher explained that “We are painfully aware of the history of Christian participation in the oppression, marginalization, and murder of First Nations peoples.” This led to the Burning the Doctrine of Discovery Ceremony. This doctrine, according to Francis Day co-sponsor Pax Christi Massachusetts, “is a religious document that was created by Pope Alexander VI in 1493 that promoted the racist policy of discovering and conquering ‘new lands,’ that were in fact already occupied.” Watch the award ceremony here: https://www.youtube.com/watch?v=qPZlQBfXbGg A “Peace Tree” was planted over the ashes of the Doctrine of Discovery and people placed sacred tobacco at its base as they prayed for peace. The ceremony was based on an Iroquois Peace Tree ceremony. View the moving ceremony here: https://www.youtube.com/watch?v=ptGJ1Y35Bzc&feature=youtu.be 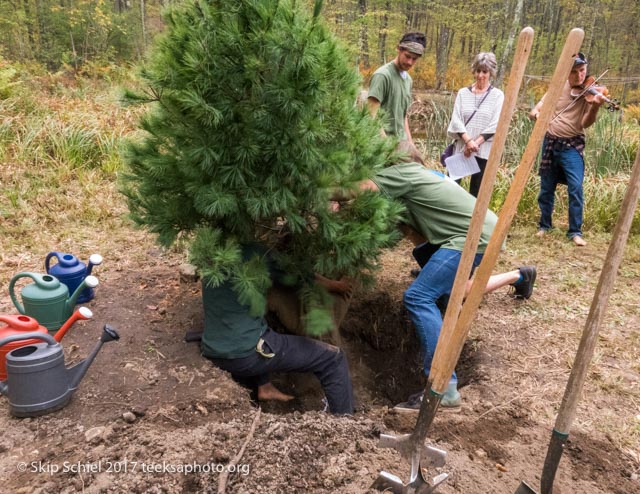 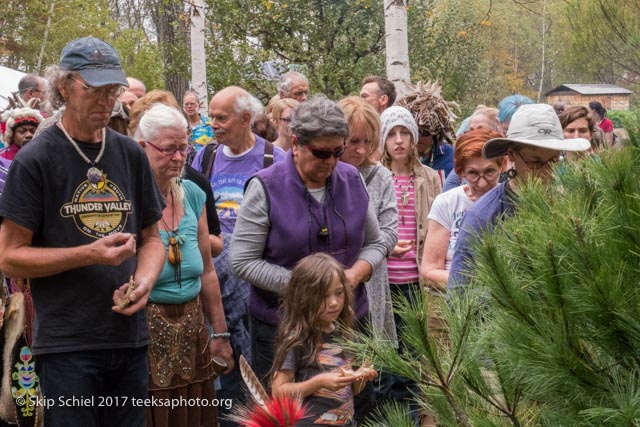 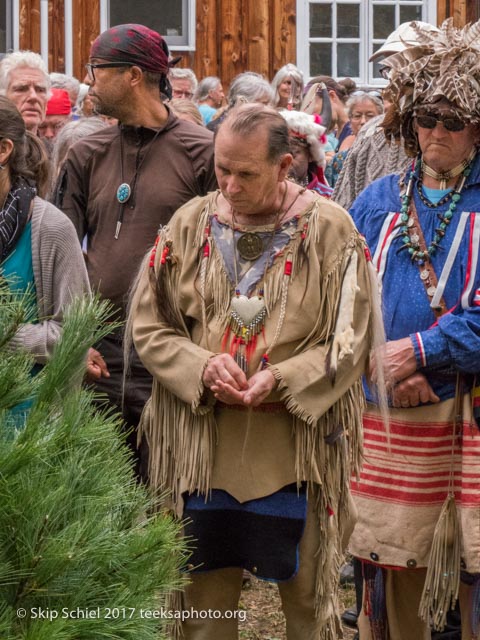 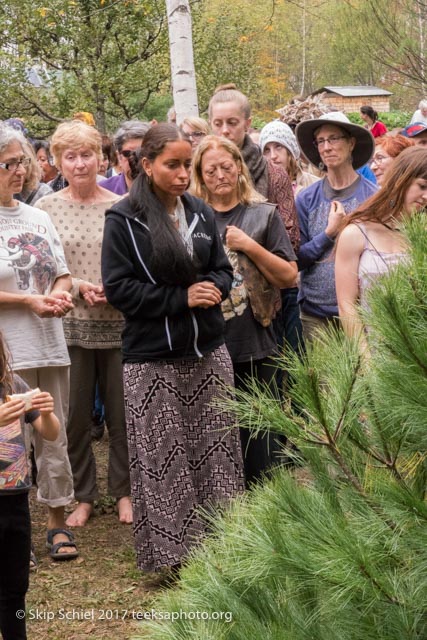 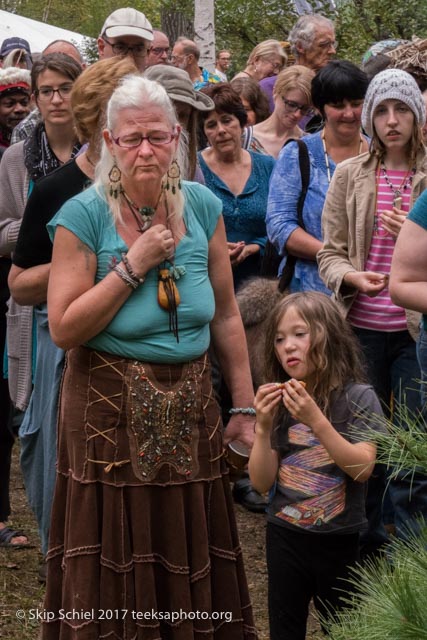 In usual Agape style, Francis Day was shared by those of all ages and faiths. 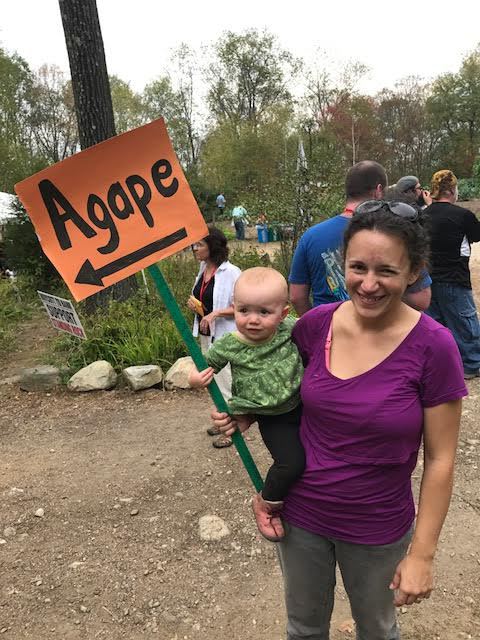 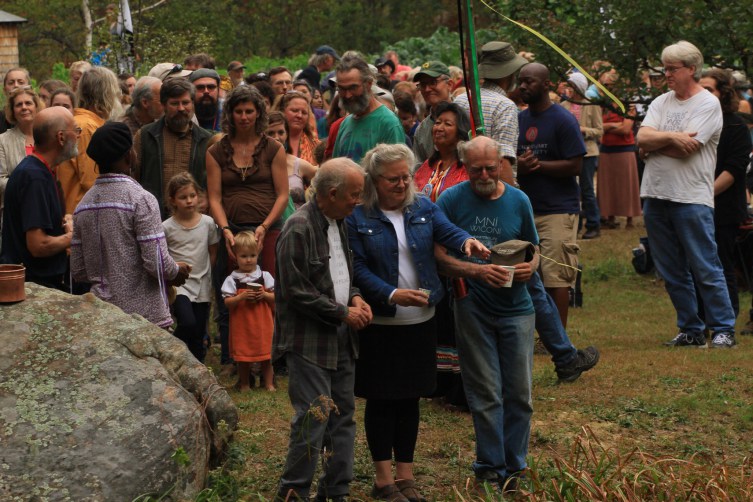