In the dead of winter or sweltering summer heat, several of us hold signs reading Boycott TD Bank–Support Standing Rock. Have stood like this this twice weekly for more than six months and have distributed some three thousand leaflets urging account holders to move their money out of TD Bank. 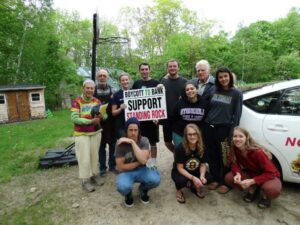 A pipeline leaked in Cambridge, Massachusetts on July 28, 2017, resulting in the evacuation of eleven buildings with no injuries. On August 2, 2017 two people died and nine suffered serious injuries from a gas explosion at Minnehaha Academy in Minnesota. Students were away for the summer, or there would have been more casualties.

Dakota Access Pipeline (DAPL), its 1,172 miles constructed at a cost of $3.8 billion, qualifies as one of the longest US pipelines. Designed to transport 570,000 barrels of crude oil a day across the Missouri river, DAPL threatens Standing Rock Sioux territory. The Center for Biological Diversity (CBD) found that pipelines in North Dakota have spilled crude oil and other hazardous liquids at least 85 times since 1996. Such spills—averaging four a year—caused more than $40 million in property damage. A large accident in July, 2013, spilled some 840 gallons of crude oil from a pipeline in Tioga, North Dakota at a cost of $17.5 million to clean up.

Hundreds of communities and concerned people from around the world joined Standing Rock Reservation native peoples in well publicized ceremonial encampment near Cannon Ball, North Dakota, during 2016 to try to stop construction of the pipeline . “Water is life,” chanted participants.

In the end, Federal Emergency Regulatory Commission (FERC) permitted the pipeline to be built. Well-disciplined, courageous resistance to the illegal, immoral, and unnecessary DAPL pipeline failed to stop it.

The deplorable situation captured our attention, urging us to boycott banks that fund pipelines and fracking industries. Across the country, pipeline opponents stand in front of complicit banks and investment firms to encourage customers to withdraw their funds from institutions that profit from enabling the building of pipelines. Whether it’s a small savings or checking account or a mortgage, every closed account matters.

As an example, 15 banks directly fund DAPL. In all, three dozen banks contribute to the larger Bakken shale pipeline that includes the DAPL link, according to research by the nonprofit Food & Water Watch.

While leafleting and holding our signs in Greenfield, we have fine opportunities to talk to people about boycotting TD Bank. Each week, people tell us they have closed their accounts or moved their mortgages or student loans to local banks.

College campuses provide receptive audiences for getting out the word about divestment.

Another course of action involves appealing to local community colleges, businesses, and towns to remove their accounts from TD bank.  To embark on weekly opposition at your local TD, Citibank, or Wells Fargo bank, you need as few as two people. One can hold a sign about why you’re there, and the other can hand out a leaflet you design to explain why you advocate boycotting the bank.  The important thing is continuity. Being there week in and week out really pays off.