A Speck at the Sea by Dave Legg 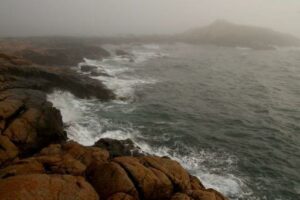 A breath in fog

at the edge of dawn am I

Standing on rock by crashing sea

Waiting and hoping on the Source

Again and again in each

“Come to me at the sea

drink your fill of Light”

Knowing God is Love for all

Each moment is made for thee

a mere speck in a moment at the sea

The sense of God’s All embracing Love was so powerful before I wrote this poem that it knocked me to my knees in tears on the rocks at Eastern Point in Gloucester. A few minutes after writing that poem and taking photos in the fog, I came across a flower springing from the rocks. Pretty amazing considering it was on February 25, 2017.

Love, prayer life and treatment of all life as sacred by Native Americans at Standing Rock camp, where “water protectors” stand firm against the DAPL pipeline, offers testimony to the importance of prayer and called me to love everyone, even Donald Trump, despite detesting his behavior. “Standing Rock is everywhere.”