Written by SuzanneShanley on October 26, 2016. Posted in Uncategorized 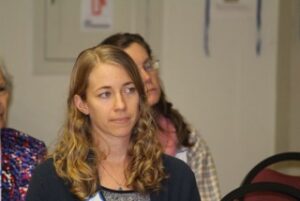 On October 22nd Alicen Roberts of Agape’s Mission Council received the John Leary Youth Peacemaker Award from Pax Christi at St. Susanna’s in Dedham.  The award was presented by Bob Wegener, also a long-standing Agape member.  What follows; Alicen reflects on Agape & Agape reflects on Alicen. I am blessed to have been a part of the wider Agape Community (family, really) since 2009. I first became aware of Agape from a poster that I happened to glance at while sipping from a water fountain during my sophomore year at Smith College. I like to joke with Brayton and Suzanne that this must have been holy water, because it opened up a life-changing path and new connection in my life. I first came to the actual site of Agape for their annual St. Francis Day gathering in the Fall of 2009, excited to hear discussions of peace efforts from a traveling Israeli and Palestinian pair. (I spent a lot of time in college studying Hebrew and Arabic in Jerusalem.) Suzanne welcomed me to stay overnight, and I ended up staying the whole weekend! I was so impressed with their radically loving and open Christian faith that emphasized nonviolence and respect for all humans, despite religious, racial, political and economic background. In hindsight, I realize that coming into such an open-minded Christian community at that stage of my faith development was really a saving grace. Since that initial visit, I’ve continued attending Agape gatherings with friends and family, and I’ve begun to take a more active role in planning these events–often through visual and performing arts. After graduating from college and travelling abroad, I moved to Boston, MA and was once again grateful to be close to Agape. I now have the fortune of helping lead the college retreats like the ones I so cherished in undergrad, and I continue to help with large-group gatherings like St. Francis Day. I am currently discerning my involvement with the Agape Mission Council, but know that however life unfolds, Agape will always be a beautiful part of my Faith Family. -Alicen Roberts, former Agape intern and Smith College Graduate ” Here is Alicen’s nomination by Agape for PC award:   Alicen Roberts is an extraordinary peacemaker who has had a long history with Agape, since she was a freshman at Smith College in Amherst, MA.  Alicen came to Agape alone on our 25th Anniversary celebration and has stayed involved at Agape ever since.  Alicen is an inspiration, a model of what can happen at a young age that becomes truly transformational.  Alicen was attracted to Agape initially because something about nonviolence resonated with her, and that resonance has continued and flourished for all these years, which have included attending every college retreat at Agape that she could attend as an undergraduate, giving her a firm foundation in the spirituality of nonviolence and its rootedness at Agape in sustainability and a life of daily prayer.   Alicen took these experiences and crafted them into a love for the Middle East, leading her to spend time in Israel-Palestine where she worked with young Palestinians, bringing them together with Israelis through the medium of drama.  Alicen is cultivating a desire to speak Arabic and has broadened her Middle East interests related to nonviolence though her work for the past two years at Cooperative Metropolitan Ministries where she has worked extensively, and probably, knowing Alicen, exhaustively, with inner city youth, with multi-ethnic and racial programs, many of which she has taken part in designing with others on the staff.   Alicen is a member of Agape’s board, called The Mission Council, along with six new young inductees who have committed to the vision and goals of Agape and meet with older members of the Council four times a year to discuss and plan aspects of the community life.     In addition, Alicen has taken on teaching and facilitating responsibilities for the Agape Community in the past four years, serving as a presenter, guide and mentor to undergrads from Stonehill College and Holy Cross who come to Agape to participate in education in nonviolence and sustainability.  We have all benefitted from her profound spiritual insights and respect for interfaith dialogue, through her draw to the gospel nonviolence of Jesus.   As we have witnessed the multi-faceted personal growth of Alicen, one of the keenest aspects of her inner being is her artistic spirit.  She is a poet, sculptor and visual artist.  Those of us at Agape will never forget her crafting of a “nest” at Agape with another young member of the community in which she used straw and other elements from off of the Agape land to design a nest into which people who attended Francis Day put their “eggs”.  Alicen invited people to paint these “rocks” by setting out brushes, paint and magic markers for people to design an egg and put it in the Agape nest, along with a poetic statement on how Agape managed to “nest” them over the years.   We are blessed as a nonviolent community in Massachusetts to have Alicen’s voice, presence and spiritual richness as we seek to attract more youth to our development of programs on nonviolence.  I could not think of a more deserving young woman, who carries in her heart the reality of Jesus’ nonviolence in everything she does, who would embody the largeness of spirit of my friend of many years ago, John Timothy Leary.   Suzanne Belote Shanley Co-founder, Agape Community     2016 Pax Christi Massachusetts Peacemaker Award Nomination To be awarded at the annual Pax Christi Massachusetts Assembly Fall 2016   This award is given to an outstanding peacemaker who embodies the ideals of Pax Christi.  She or he need not be a member of Pax Christi and may be a person as young as 16, or older.  Nominations may be submitted by PC-MA members, teachers, campus ministers, parish pastoral leaders, youth ministers, family members or friends who have been inspired by the nominee.