Written by SuzanneShanley on May 2, 2016. Posted in Daily Bread, Front Page

At Agape we are remembering Daniel Berrigan, SJ, after news of his death Saturday. We have shared an article written by Dan, a piece written by Suzanne, and an illustration of Dan. 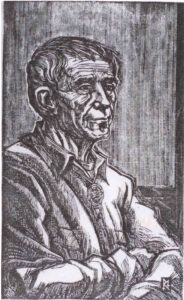 Below is an article that Dan wrote on the occasion of the Agape’s Community’s Tenth Anniversary in 1992:

And below, a tribute to Daniel Berrigan by Suzanne Belote Shanley:

Tribute to a Normative Christian: Daniel Berrigan, S.J. Written for the Tenth Anniversary of the Agape Community. In the anthology of Daniel Berrigan’s literary works edited by Michael True, Dan is quoted in one excerpt as saying: I believe we were created for ecstasy. And redeemed for it, at considerable cost. Certain vagrant moments are moreover, clues to the native structure and texture of things. Only a poet such as Daniel Berrigan could encapsulate the nature of being as “ecstasy” offering the humble phrase “vagrant moment” to assist us in defining, in the perspective of eternity, the ten vagrant moments (years) in the life of the Agape Community. Ecstasy, writes Berrigan, is “our proper distillation of soul.” And what a soul indeed, that of our friend, Daniel, “to wit,” (as he would say), “guilty,” as his friend William Stringfellow once sentenced him in print, “of preaching the Resurrection.” Would that we could all be found guilty of breaking what Berrigan calls, “the state control of death.” Nevertheless, we must advise a caution here—granting status of sainthood to Dan, lest we begin to believe as some prominent theologians console us: “Nonviolence is meant for the exalted few, the elect. An isolate, world-denying, sectarian aberration.” As if Jesus anointed a “few” to preach the Resurrection. Not so, says Stringfellow of Berrigan who in Stringfellow’s estimate, “had not been all that unusual, but simply normative for a Christian.” This is not to say that the Berrigan muse, his gift of poetry, of the written word is normative. For this superlative gift to the community of aberrational sectarians, we rejoice! But in so rejoicing, we remember what Stringfellow said, what Dan signifies: Nonviolence is normative. In this gospel tradition, the Jesus-story—our story. Nonviolence is normative, Consider this. Ponder this. Measure it against the “normative” violence of our culture, soaked in blood we can’t wash off. Our affliction Dante tells us is that of Vilta or “littleness of soul.” We normative Christians are trivializers of truth. We own “little souls” which yearn to wade through the lies, the denial, and move into Scripture. We are witnesses in the scene of “The Great Debate” between the potentate Pilate and the candidate for Resurrection, Jesus. “What is truth?” Pilate asks Jesus. Dan writes that Dorothy Day spoke and lived the answer: “Loving the truth as if it were true.” That’s it. Simple. A poem then, for Daniel on this occasion of our community’s Tenth Anniverary, for his… Loving the Truth as if it were True By Suzanne Belote Shanley to preach the Resurrection to be normative to be a scandal to walk with the Scandalous One to live in ecstasy to be meek, “God-molded” to be summoned, “to break the mold,” “The God-molded, mold-breakers” To foster life as we hear From our Normative Man Berrigan, “along a whole spectrum Pre-birth to the last gasp To give quiet and persistent evidence Of the great idea tat The sacred is not a threat to humankind That our prayer is to be Blessed with the gift of tears.”   Tears and ecstasy God-molded mold-breakers.   People, this is who we are, blessed with the gift of tears capable of repentance created for ecstasy, those vagrant moments, a clue perhaps, as the poet says, “to the native structure, the texture of things.”   This nonviolent credo is offered to us by our Nonviolent Troubadour, Daniel Berrigan SJ, who, on his 50th Anniversary as a Jesuit recommends these ingredients for ecstasy: Courage and excellence Don’t kill for whatever pretext Leave the world unbefouled Don’t Hoard Stand somewhere!!   Where do we stand? A fitting way to conclude my introduction is to quote from a letter Dan sent for our ground-breaking three years ago: Dear Ones Sometimes the uphill tends to be awfully perpendicular and we turn into mountain goats or rope-hangers—but dangle and sweat and pull and even make it to the next ledge. Given the world, Can I wish you, (us) the next ledge?   We could do worse. But here we are. And a muted Alleluia! And a thank-you that never dies in the throat.   And to you, Daniel Berrigan, at this vagrant moment of 10 clue-filled years we, the aspiring to be Normative Christians wish you a muted Alleluia A thank-you that never dies in the heart.   by Suzanne Belote Shanley