Witness: Veterans for Peace Against the Death Penalty – By Joe Kerbartas

I am a member of the Pax Christi, Veterans for Peace, Peace Action and South Boston Residents for Peace. On March 4, 2015, the Trial of Dzhokhkar Tsarnaev, for the Boston Marathon Bombing began, the first time a death penalty could be imposed in Massachusetts since 2001. The last use of the death penalty was in 1947 with the executions of Phil Belidor and Edward Gerston for murder.   In 1984 the Massachusetts Legislature abolished the death penalty. 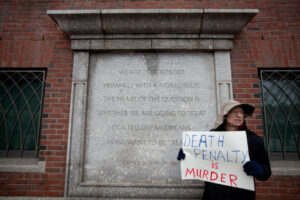 I woke up that March 4th morning and went to the John Joseph Moakley Court House to protest the possible use of the death penalty, making a sign which read: “The Death Penalty Is Murder.”  While I was taking the subway to the court house, I wondered how many people would be there protesting the death penalty.   Upon my arrival, I found a temporary fence at the front entrance to the court house with a large number of cameras and press gathered there. To the left of the door was a plaque of a quote from President John F Kennedy:   “We are confronted primarily with a moral issue… The heart of the question is whether we are going to treat our fellow Americans as we want to be treated.”  The only one protesting the death penalty, I stood under the granite plaque and unrolled my sign. “The Death Penalty is Murder”.   There was a rush of reporters with their “I” phones, cameras and note books. I felt like a celebrity. I gave them my name and reasons why I was protesting the death penalty: Pax Christi is a Pro Life Catholic group. The Pope and US Bishops wrote statements condemning the use of the death penalty.  The Old Testament has the Commandment “Thou Shalt Not Kill”.  In the New Testament, the implication is that for every saint there is a haunting past and for every sinner there is a redeemable future. In chapters 26-28 of the Acts of the Apostles, Saul, a murderer of Jews is accepted and welcomed by his former enemies, Barnabas and others. The persecutor/murderer Saul, becomes the redeemed, St. Paul. This forgiveness narrative convinces us that it is immoral for the state to cut off any person’s future. Only God has the power to end someone’s life.  Using the death penalty creates yet another victim. I was very surprised that I was the only protester out that day.  For the next week and a half, I stood alone outside the court house. I greeted everyone going into the courthouse with a “Good Morning.”   Most people just walked by, but a few people gave me a “thumbs down” or a disparaging remark.  A larger number would give me a “thumbs up” or thank me for being there. Agape was the first group to join me.  On the days Agape was there, we would have 10 to 15 people. A small group of Veterans for Peace gathered with me every day for the rest of the trial and its penalty stage. One man came up to us and said:  “Your signs changed my mind. I was for the death penalty, and now I am against it.” International news services, like the BBC, AP, Reuters, as well as Irish, Russian, and Norwegian journalists, would stop by and ask for interviews and photos.   Boston’s major daily newspapers and local TV and radio stations interviewed us and the internet was flooded with photos of us protesting at the court house. This worldwide publicity made people think about the death penalty. A friend told me: “I have a friend in Mali who saw our photos and he felt the people in the USA are now against the death penalty.” We hope that this publicity has increased the numbers in the polls against the use of the death penalty. Before the trial, 60% of Bostonians were against the use of the death penalty.  Now in Boston 80% of the people in the latest poll are against it.  Most people I talked to about the trial said that the Tsarnaev should receive life imprisonment. On May 15th at 3pm, I was very saddened to hear the news of the jury verdict that Tsarnaev would receive the death penalty.  Four of us Veterans for Peace stood outside the court house that afternoon.   The press mobbed us, taking photos and conducting interviews in which we expressed the hope that the cycle of death would be broken with a life sentence. June 24th is the final sentencing day and we hope to have more protestors with us that day and during the appeal stages of this trial. I plan on being at the Moakley Courthouse, and hope some of you from Massachusetts will join me.