Sowing Seeds: Reflection on the Anniversary of Our Agape Wedding, May 29th 2014 – By Emily Jendzejec and Bennett Comerford

Spring of 2005: We Come to Agape We like to think of it more as it was always meant to be. Agape chose us years ago, and we have been a part of the community ever since.  In the spring of 2005 we were ready to graduate and leave Boston College.  As seniors, we were both feeling an itching desire to explore beyond the confines of the college campus.  A campus minister encouraged us to go on a retreat in Western Massachusetts.  She thought it would be just the type of inspiration we were looking for, and we trusted her, so without too much questioning we decided to go. We hopped in our friend’s borrowed car, with our close friend Becky in tow, and drove out to western Massachusetts, exited at Palmer and went straight on to Agape.  As we slowly drove up the dirt driveway through the early spring fauna, we each took a deep breath knowing we were somewhere special.  We were greeted on the front steps by Joe Mitkevicius, an intern living at Agape at the time, who would become a fast and life-long friend to us all.  We felt at home not yet knowing that this community would shape our lives, our relationship and our individual spirituality forever. When we became engaged two years ago, we both knew in our hearts the only place we wanted to share our vows with one another and profess them in front of our families was at Agape.  Not only was the space special to us, but the Catholicism that Suzanne and Brayton emulate and Agape represents is what we strive to be faithful to.  While we feel deeply rooted in our identity as Catholics, neither one of us would feel completely comfortable getting married in a traditional Catholic Church. 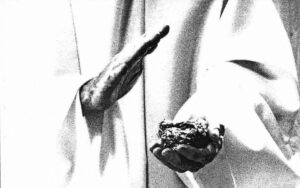 The Preparation We knew it would not be the easiest way to have a wedding, in the woods of Hardwick MA, but we knew it was the only way that would be authentic to our relationship.  It required pulling off several miracles along the way. The first miracle was that our families were supportive and on board for the adventure.  Having our wedding in the chapel at Agape meant not only having everyone traveling, but also meant we could only invite our immediate family, due to the size of the space. Maximum capacity for people in chairs, we guessed would be around 40. The second miracle was that the Auxiliary Bishop of Worcester supported our request for the Catholic Sacrament of Matrimony to take place at Agape after many phone calls from the two of us, Suzanne and Brayton, our home church in Boston, and the priest who was to marry us, Fr. Frank Clooney SJ. Receiving the Catholic sacrament of marriage was important to us both as we share a strong desire for staying rooted in Catholicism and cherish its rituals and sacraments. The Wedding Day: The Wedding was on a glorious sunny and unseasonably warm Thursday in late May.  The buds on the trees were youthfully bright as was the green surrounding St. Francis house. Suzanne orchestrated the beautifying process–setting up the chapel, and all the bedrooms in St. Francis House, where our families would stay for the night.  Bennett successfully squeezed 35 chairs into the chapel making us all question whether maybe his real vocation was in geometry instead of religion! Emily got ready for the “walk down the aisle” from Agape’s straw bale house, named Brigid House, with the help of her sister and closest friends.  Emily’s parents and sister met her at the entrance of Brigid House, and they walked arm in arm up the path towards Francis House- a family of four for the last time. At the stairs of Francis House, those same stairs that many years ago we had walked up for the first time together to go on the college retreat, Bennett, his sister, and parents were waiting.  The two families hugged and Emily’s father offered a blessing. The parents and sisters filed into Francis House and we, the about to be married ones, were left alone for a brief moment.  We giggled as we soaked in the experience, and then decided to ditch our shoes and walk into the chapel barefoot.  As we arrived at the altar together, the room bursting (literally!) with love, the afternoon sun shined through the stained glass, everyone’s faces beaming with glistening tears. The Catholic Mass was facilitated by Father Frank Clooney, SJ.  We both know Frank well, with Bennett having first meeting him as an undergraduate at Boston College and most recently as Bennett’s advisor for his doctorate program at Harvard.  Even though Frank had never been to Agape, Emily trusted his ability to show up and ease right into the flow of the day, possessing the Jesuit talent to say anywhere, a stunningly beautiful and profound Mass as the spirit moved him. Frank’s homily was a rare gift, capturing the essence of the day and the occasion. Frank’s words, guided, no doubt, by The Holy Spirit, were messages of living a shared life of transformation, community and love. The readings were read by our closest childhood friends and the music was done by Becky and Brayton, and Cassie’s boyfriend, Avi.  The altar cloth was one Suzanne found at Goodwill yet originally from India, a place sacred and important to Bennett.  Emily baked the Eucharistic bread and it was served on a pottery dish she had made.  We served as Eucharistic ministers providing us a moment to offer a blessing to each person in the chapel. As the service concluded, the community blessed us as a married couple and we lead everyone out of the chapel singing an Agape favorite- “Come with me for the journey is long. Dance with me for the journey is long. Sing with me for the journey is long. Marry me for the journey is long! We toasted outside as we continued to sing, and take obligatory pictures next to the pond (even the bugs helped us celebrate by staying away relatively speaking!).  We all shared together in a vegetarian feast by Steve Cobb, a local soup meister. Emily’s grandfather was so impressed with the roasted tofu he thought it was some of the best roast beef he had ever had!  The beverages were local beer from the Spencer Trappist Monks and Oregon Wine (where Bennett hails from). The cake, made by a family friend, was cut and shared in the living room.  Then into the night we sang around the campfire, people taking turns with the guitar and drums, in true Agape form. The next morning, once again as a community, we gathered for prayer in the chapel.  We gave thanks for our time together and then headed up in a caravan to Maine for a continued celebration with extended family and friends. We give thanks for Suzanne and Brayton in their support and love through the marriage process and through the past ten years in general.