“Blessed Are the Merciful” – By Pat Ferrone

Armed only with banners advocating mercy, and signs decrying the death penalty, nonviolent peacemakers from Agape, Pax Christi, Veterans for Peace and elsewhere, regularly stand vigil in front of the John Joseph Moakley Courthouse in Boston. In the early morning, a stream of employees, visitors, victims and lawyers pass before us, some with averted eyes or unreadable expressions, some clearly disdainful, like the man who muttered, “We should fry him – crisp as bacon.” Others, perhaps reflecting the general distaste for the death penalty in Massachusetts, pause to read the banners, or quietly voice appreciation and thanks for our witness. Reporters from the major news outlets are strategically stationed in view of the entryway, eager to capture the highlights of the day. On several occasions, interviews of vigil participants takes place, the reflections broadcast beyond our small witness. 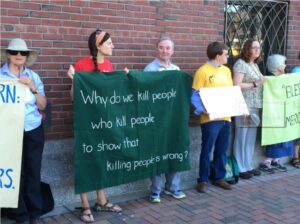 As I write, the federal capital trial of Dzhokhar Tsarnaev, admitted and convicted Marathon Bomber, is in its winding-down phase as the defense team offers a mosaic of reasons why this young man should be spared the death penalty, despite his culpability. During these latter weeks, family members, teachers and others brought in to testify, recall the young person they once knew, describing him as friendly, gentle and intelligent – not the kind of kid prone to violent behavior. Clearly, the defense team hopes to soften the perception of him as a categorically evil monster, beyond redemption. Focusing on the influence of his turbulent family background and Dzhokhar’s idolized yet controlling older brother Tamerlan, a former brother-in-law said that in Chechen culture, he would be “obligated to do what his older brother tells him,” and that it was “better to be a dog than a younger brother.” Through graphic testimony and visuals presented by the prosecution, the trial has laid bare the still raw suffering of the families of those brutality killed, and has exposed the enduring pain of the forever wounded. Amidst the repetitive and dire picture of destruction, the abyss of pain generates little empathy in many hearts for the young man on trial for his life. Flanked on both sides by the women of the defense team, Dzhokhar’s impossible aloneness seems somewhat mitigated by their mindfulness. Their simple gestures of human contact and solace remind us that, despite the radical fact of sin, individual and social, ”each person’s human dignity must be honored” as it is imparted by an unconditionally loving God, not by us. As the trial evolves, Dzhokhar, the victims, jurors, and the people of Boston are required to confront the madness that exploded into havoc on a bright, celebratory spring day in 2013. That day – burned into memory’s horror chamber – was one in which few in Massachusetts were spared the experience of fear and outrage that pervaded the very atmosphere of the city as the blasphemy of destruction screamed its way into our small world. Out of the blue – here, not there – not Iraq or Afghanistan, not Syria or Nigeria or Yemen – terror came calling, ripping from us the naive innocence that had led many to believe that we, the righteous of American, are somehow immune to the kind of violence that is daily fare in other parts of the world. All of us traumatized, it was difficult at that time to consider the possibility that the global “culture of death,” in which our country and its military are implicated, could spawn a response of malevolence directed toward innocent people in our city, fulfilling the prophesy that violence begets violence, ad infinitum. 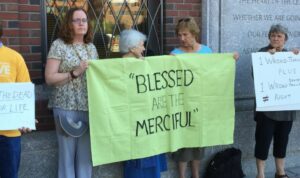 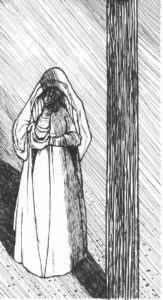 Postscript: May 15, 2015: Somber and sad, we hear the jury’s pronouncement of death for Dzhokhar Tsarnaev, and mourn again the tragedy of lives lost, and souls and bodies maimed by human initiated violence. Though our standing and our stance for Tsarnaev’s final sentencing by Judge O’Toole on June 24th at the Moakley Courthouse may bring few immediate results, it remains incumbent upon us as witnesses to the gospel of peace to utter words that may one day take wing and settle in others’ hearts. For now, we ask for the courage and strength to labor in love to end the death penalty, and to blanket the pain of the world with mercy. So be it. Pat Ferrone has been an integral part of the life of Agape since its inception in 1982; in addition, Pat is the Regional coordinator of Pax Christi MA and a leader in the Peace and Justice Committee at St. Susanna’s parish in Dedham, MA.