Agape Community > Blog > Servant Song > Vol.27 No.2 Summer/Fall 2018 > Pray With Our Feet: A Kairos Moment in Charlottesville One Year Later

Pray With Our Feet: A Kairos Moment in Charlottesville One Year Later 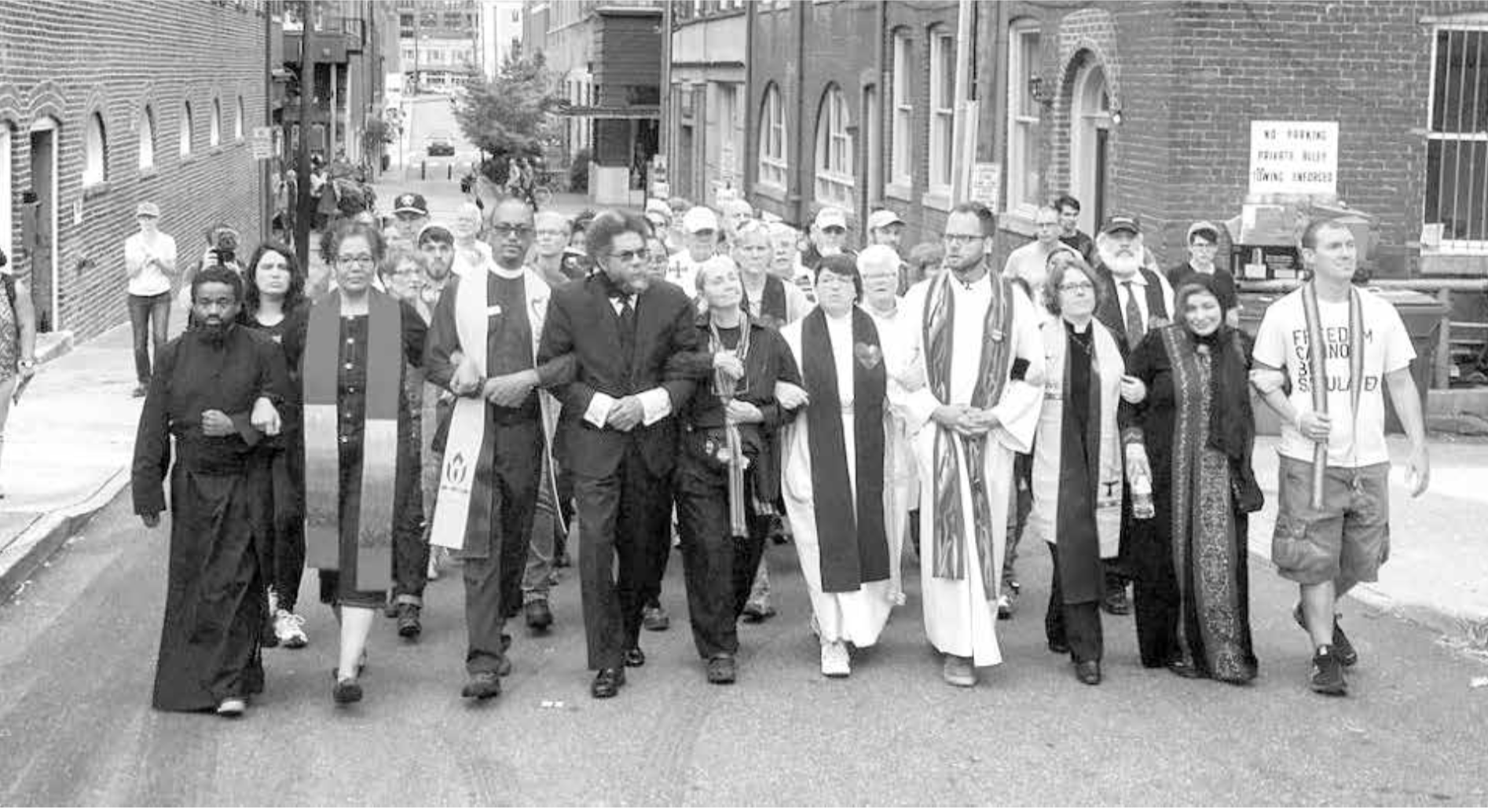 Life in Charlottesville tends to normalize what may seem dramatic or outlandish elsewhere. Amidst the violence that has become synonymous with our town’s name on August 12 last year, DeAndre Harris suffered a concussion, a broken arm, a spinal injury, and a chipped tooth in an assault by six men, yet he was charged with felonious unlawful wounding.

That same day, Corey Long defended himself and an elderly man from a crowd of white supremacists who had already spit on him and threatened his life, and was shot at by a KKK imperial wizard. Corey was sent to jail and lost his job having harmed no one.

When a woman who remains in a wheelchair because of injuries from the car attack last summer protested Long’s sentencing, she was arrested, and the magistrate denied a lawyer’s entry and locked her visitors outside for hours. Perplexingly, the man who organized all the violence that August sued a woman for calling him names such as “crybaby” in public, and won.

So it is perhaps not as odd as it appears that I am facing a year in jail and banned from the University of Virginia (UVA) campus for reading a book near our town’s most visible white supremacist in the library. (To avoid the recognition he desires, let’s call him “Steve.”)

After he led four hundred “alt-right” marchers to UVA’s campus with lit torches and chanting Nazi slogans, Steve and his group beat and maced students. Though videos captured the assault and multiple assailants have been identified, UVA declined to press any charges. And though the Black Student Alliance and other campus groups have called since September 1 for these men to be banned from campus – a routine for homeless people who enter the grounds – UVA failed even in this modest safety measure for over eight inexplicable months.

On April 18, Steve returned to campus. Students were scared and upset to find him in the law library filming them while he pretended to study. Afterwards, students and faculty voiced their concern that had so long been ignored by their university. “I was scared he would hurt one of my friends… He is dangerous,” said one. Another, who was watching Steve, was confronted by a police officer, who said: “He’s done nothing wrong.” Others described how they were “paralyzed” or ran away from him. They voiced their outrage that Steve harassed Jews and women during his stay. “I was physically shaking for hours,” said one. The stories went on, and the ones most affected were unsurprisingly Jews, people of color, women, and LGBT students.

One week later, Steve returned to the very same spot.  I was called and asked to be present, arriving at the library to find around forty people assembled outside a door. Steve, I was told, was studying inside. Some students had already left crying, their friends informed me.  I watched as the remaining students tried and failed to find out from school officials why Steve received his own private study space and police to guard him when he had attacked students, and not the other way around. The dark irony was all the more stark because the person most seriously injured the night of August 11 by Steve and his friends was a UVA library employee, who had been beaten into a stroke.

Holding in mind the violence Steve had brought to our town, including the murder of Heather Heyer, and mindful of the student complaints one week earlier, I entered the office and studied with Steve. Careful not to do anything that could be construed as harassment, including looking at him; I simply sat down across the table from him and read what happened to be in my backpack – The Rise and Fall of Apartheid. When a law school administrator asked me to leave, I refused to leave until they asked Steve to leave as well.  University police arrested me and led me out of the library in handcuffs. Stephen Parr, the Senior Associate Dean at the law school, ordered the police to arrest me for trespassing. Steve was allowed to keep studying under police guard and received an escort out while I sat in jail.

Two days later, Steve was banned from campus. UVA has yet to ban or charge him or any others, whom video shows beat their fellow students, with crimes. Whatever attention my acts might attract, I think it far more important to consider the fate of the students at UVA, particular those most vulnerable to the KKK, neo-Nazis, white nationalists, and violent thugs who graced our news reports last August in Charlottesville. Nothing stops them from returning to campus but the decision of UVA officials.

As people of faith, we must say without reservation that UVA’s indifference is evil, as is all white supremacy.  Christians are called not to ignore evil, but to confront it. We must learn, as Rabbi Abraham Joshua Heschel said, to pray with our feet. In this kairos moment, I hope we may be worthy of our spiritual ancestors.

At this time, there is no trial date set for Eric’s trespass. Eric is the co-editor of The Berrigan Letters, a doctoral candidate in theology at Fordham University, a peace activist in the Catholic Worker tradition.  Funding: https://www.gofundme.com/support-eric-martin-and-cville