Practicing for When Peace Breaks Out 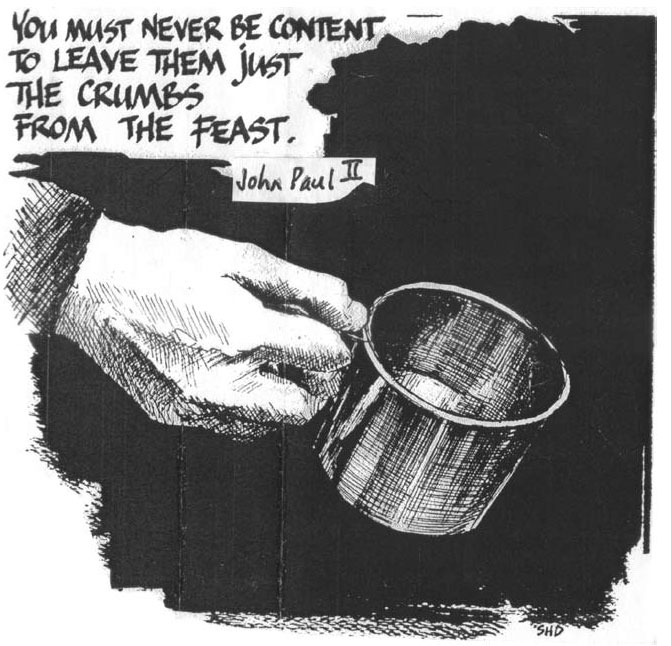 by Brenna Cussen and Eric Anglada —

Yesterday was our fifth wedding anniversary. Our wedding day, October 2, 2010, was much like today – overcast, low fifties, and chilly. Like today, we were surrounded by wonderful people and much joy. The sacrament took place at our local Catholic parish, and the celebration at New Hope Catholic Worker Farm in Iowa, where the food we served had been mostly grown by our community, on our own land. The string band of our Catholic Worker farmer friend led us in music and circle dancing.

During the reception, we got word that the first killing frost was to take place that night. Our community member asked us whether we thought it would be OK to ask the wedding guests to go out into the field to harvest the remainder of our winter squash. The band serenaded us as our guests – who ranged from anarchists dressed in flannels to relatives decked out in suits, ties, dresses, and heels – happily pulled pumpkins, butternuts, acorns, and gourds. Most people later told us that this part of the wedding (the only part we hadn’t carefully planned out) was the highlight of the day.

Why did we say “Yes” to community and why do we continue to say “Yes”?

One of the big reasons why I (Brenna) originally said “yes” to community is right here: I see so many people gathered here– who supported me in committing to this way of life by letting me know that an alternative to the mainstream was possible. I was opposed to the violence of war and wanting to be a part of the solution, was inspired by the Schaeffer-Duffys’ work for peace through traveling to places like Iraq, Israel/Palestine, and Afghanistan, or doing civil disobedience.

Fifteen years later, I continue to say “yes” to community through my participation in the Catholic Worker movement where it has become clear to me that at the heart of war and violence in the world lies the consumer lifestyle of the wealthy, particularly the wealthy in the United States. I want to be a part of building a community and a way of life that does not have to depend on the exploitation of the land and the poor for its sustenance, an essential part of peace-making.

Eric: Brian Terrell, a long time Catholic Worker farmer and peace activist who lives with his wife Betsy in Iowa, often recounts how people who visit their modest homestead remark on their commitment to growing dried beans by hand. “Why waste your time on that when you can just buy beans so cheaply?”  Their question belies an assumption that is unfortunately true for too many of us: the time of white, privileged U.S. citizens is more valuable than the time of those who are poor (and most likely people of color), who live in different countries, and who probably have nothing better to do than to get paid next-to-nothing to grow food for rich, white Americans. Brian likes to say that when peace breaks out, we won’t be able to exploit the poor to grow our food cheaply. We’ll have no choice but to do it ourselves.

At New Hope Catholic Worker Farm, we have seen our own work – raising the majority of our diet; moving away from a reliance on gas, oil, and coal by cooking and heating with wood; composting our human waste – as a way to “practice for when peace breaks out.” We have built community among four families praying, eating, celebrating and working through conflict together.

For those of us raised as white, middle class Americans, individualism is so ingrained in us that it is difficult to live together and at New Hope, we came up against this barrier all too often. So, every Friday morning for four years, we practiced a “reconciliation ritual” with one another and received training in nonviolent communication.

Sadly, we have come up against challenges to communal farm life that we could not overcome. With erratic weather patterns over the past few years, our land has become too vulnerable to flooding in order to continue to community on it. This, coupled with strict local zoning laws, has resulted in only one family being able to remain on that land. Two other families (ours included) are looking for a new place to start a Catholic Worker farm. Land prices are high – beyond the reach of those of us attempting to live simple, sustainable lives. So we have approached religious communities in our area (who have land and resources, but few young people) to request that they donate a portion of their land to us. While several have declined, one group, the Sinsinawa Dominican sisters, has taken our request very seriously and is deliberating the possibility. They will let us know their decision in April.

While there are great challenges, there is also great hope. Pope Francis, in his new encyclical, Laudato Si’, says that the only way to reclaim our humanity in the midst of this “globalization of the technocratic paradigm” is to “opt for a non-consumerist model of life, recreation, and community.” This type of “authentic humanity,” he claims, dwells “in the midst of our technological culture, almost unnoticed, like a mist seeping gently beneath a closed door.” We like to think of ourselves as part of this mist, a community movement attempting to create as Peter Maurin wrote, a new culture “within the shell of the old.”